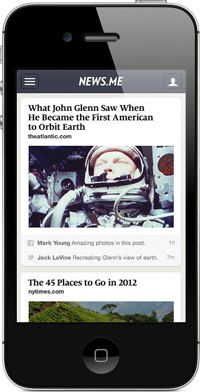 News.me is a service from the New York-based innovation lab betaworks that filters users’ Twitter and Facebook streams to deliver them the most interesting stories they might have missed. It started out on the iPad only, but today it is launching on the iPhone with some new features.

The company gained strong traction recently after social news-aggregator Summify was purchased by Twitter and shut down, and News.me received ten-times the normal amount of daily sign-ups. News.me general manager Jake Levine hopes moving to the iPhone, which has roughly 100-times the users of the iPad, will add another boost.

“We’re very focused on building a social network for news from the ground up, and the iPhone is a natural part of that ecosystem.”

In designing for the iPhone, News.me made a few changes. The tablet version is a lean-back experience that users spend a lot of time with. The iPhone is meant for quick consumption and response. To that end, News.me has added a series of one tap “reactions.” When reading a story, users can see reactions from their social networks, and with a single tap, add their own response: Ha!, Sad, Awesome, Really?, and Wow.

The model is similar to like the reactions people can record on Buzzfeed or Canvas, the idea being that lightweight, pre-packaged responses help more people to engage and give the news item a certain viral lift. Plus, says Levine, if people begin to use them a lot, News.me will have a powerful set of structured data it can play with to help show what stories inspired the most anger, confusion, or joy. “We look at what Instagram and Foursquare have been able to accomplish, building a new social network around photos and location,” said Levine. “

News.me hits the iPhone and builds out a social network for news