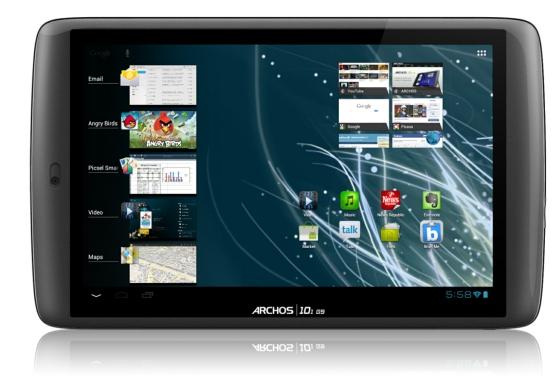 The Archos Gen9 tablets have been endowed with newer and faster processors – where both the Archos 80 G9 and the Archos 101 G9 will feature a 1.5GHz Texas Instruments OMAP 4 dual-core processor. Originally, when these tablets were launched in 2011, they came with 1GHz OMAP 4 chips alongside Google’s Android 3.2 Honeycomb operating system.

Ever since then, the Android 4.0 Ice Cream Sandwich update was released, in addition to bumping up the GHz count to 1.2. As for the latest versions, they will sport 1.5GHz of goodness, without altering the price point in any way. The 8″ Archos 80 tablet will retail for $269, while the 10″ Archos 101 G9 will sell for $330 a pop. It does seem as though these two Android-powered tablets are the only ones that have hard drives running underneath the hood, taking the road less traveled, instead of flash memory as with other manufacturers. By Ubergizmo.
Follow this link:
Archos Gen9 Turbo tablets released