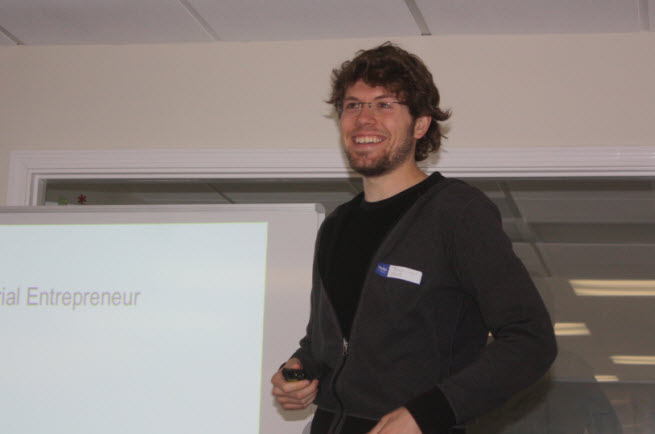 Jason Citron scored big when he sold OpenFeint to Japan’s Gree for $104 million. Now the entrepreneur is back again with a new company called Phoenix Guild. For now, it’s a one-man shop. Citron plans to make social games for the “post-PC” era, which means making games for devices with touchscreens such as smartphones and tablets. Citron doesn’t need to work, and he could fund the company himself. But he’s raising a $1 million seed round. Citron made his announcement during a demo day in Menlo Park, Calif., put on by Silicon Valley incubator YouWeb and incubator StartEngine, which is based in Los Angeles. Citron is working as an entrepreneur-in-residence for the second time at YouWeb. Citron used to work at console game company Double Fine Productions, where he worked on Brutal Legend. He was also involved in Eragon at Stormfront Studios. He sidetracked into the iPhone while he was an entrepreneur-in-residence at YouWeb. Citron founded Aurora Feint and launched his first game as the App Store opened in 2008. He expected maybe 100 people to play the game that day, but by the time he woke up, more than 2,000 had downloaded it. Then he morphed that company into OpenFeint, which created a mobile social network platform. Gree bought it, and it now has 200 million users. Citron said he is working on his own now, writing code for his first game. He plans to pull together a team, but he also thinks he can launch the game this year. “All of the gaming today is casual or mid-core,” he said. “There is a huge bunch of gamers who can’t frigging stand this crap, myself among them.” He wants to create real games that console fans will like, but he will do it on devices like tablets. He noted that Funzio, which has had three big hits with its iPhone mid-core games, has just been acquired by Gree. He said, “We want to [be] Funzio, but fast forward that by five years.” Filed under: games, gbunfiltered