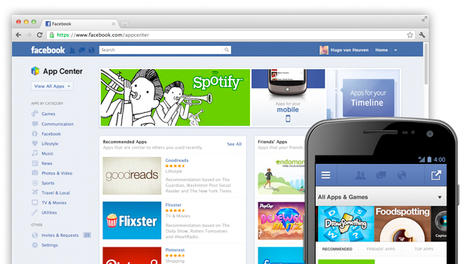 Facebook has announced it will launch a new tool to allow users to discover the best apps, games and services that connect with the social network.An app store of sorts, the new App Center will become a key feature of the Facebook.com website as well as the apps for iOS and Android when it launches in the coming weeks.App Center will rank the likes of Spotify, Pinterest and Draw Something through user ratings, average time spent using the app, and how often it is voluntarily shared by users.

Each user will see a list of top apps, designed for them based on their own usage patterns, so personal leaderboards will not be dominated by the the same old apps that simply boast the most users.The centre of your social app world In a post on the Facebook developers’ blog Aaron Brady says: “For the over 900 million people that use Facebook, the App Center will become the new, central place to find great apps like Draw Something, Pinterest, Spotify, Battle Pirates, Viddy, and Bubble Witch Saga. “Everything has an app detail page, which helps people see what makes an app unique and lets them install it before going to an app.”Success through the App Center is tied to the quality of an app. We use a variety of signals, such as user ratings and engagement, to determine if an app is listed in the App Center.”The company will also let developers charge a one-off fee to use their service through Facebook and is encouraging developers to create their ‘App detail page’ today.

Facebook launches its own app store with App Center