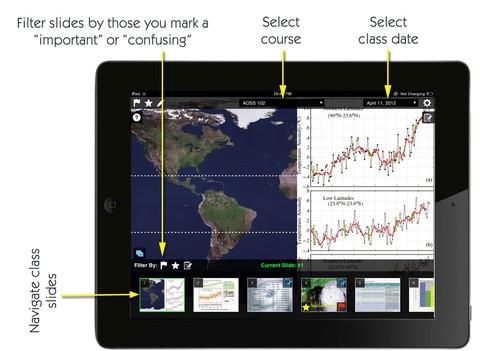 If you’re someone who’s quite shy and don’t really like answering or asking questions while in class, there’s an app for that! Perry Samson, a professor at the University of Michigan has developed an iPad app that aims to make use of technology in order to make interactions within the classroom more engaging and less intimidating.

Dubbed LectureTools (which is also the name of the company the app is launched under), the app was originally designed for regular computers but has since been ported onto tablets. It will now allow students to use their iPads in class to keep notes on lectures, send questions to faculty members and also respond to questions that the lecturer might be asking during class. This includes multiple choice questions, free response along with image-based questions. Students will also be able to write on the side of a lecture slide to voice out their questions or to ask for clarification on a particular slide/topic that they find confusing. Since the information is saved online, students will be able to access it via different methods, such as through mobile devices like the iPad, but also through their computers
Read More:
LectureTools is an iPad app that hopes to make lectures a more engaging and intimate experience

6 Brands Get It Right on Viddy