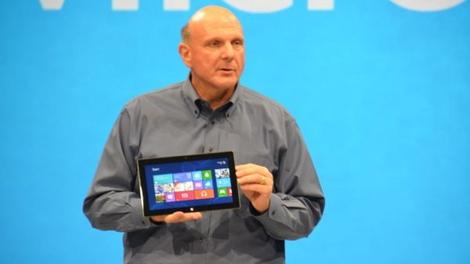 At a special event this afternoon in Los Angeles, Microsoft fulfilled the rumors and unveiled their new tablet, called the Microsoft Surface.The Microsoft Surface tablet weighs 1.5 lbs and sports a 10.6-inch Gorilla Glass display, edges beveled at 22 degrees, a 9.33mm magnesium case, USB 2.0 and DisplayPort for high resolution displays.The Microsoft Surface tablet will come in a number of flavors, including those that run Windows RT and a version with an Intel chip that will run the full desktop Windows 8 OS.That version, which has a higher-res display called “ClearType,” is a “full PC,” said Microsoft Corporate VP Michael Anguilo.

He added that its specs rival those of the most powerful ultrabooks available.Other notable features of the Microsoft Surface include a built-in kickstand for easy media viewing, pen input with digital ink sampling at 600 dpi, and a magnetic cover similar to the iPad’s, but with a full multitouch keyboard and trackpad.In addition to the magnetic cover, Microsoft unveiled the Type Cover physical keyboard attachment with a full trackpad and clicking buttons for more tactile feedback