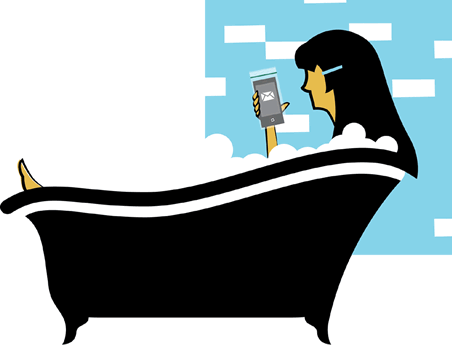 According to a study released by Mailchimp, Mobile-email usage is skyrocketing as sophisticated mobile devices permeate the consumer market. In early 2011, smartphone sales finally outsold PCs, marking a turning point in the way we consume digital content. Even more astonishing, in the fourth quarter of 2011, more iPhones were sold than babies were born.

Despite this staggering iPhone statistic, Android is still leading in total devices shipped to retailers, but Apple is still gaining ground. Nokia and Blackberry (Research in Motion) are steadily losing traction in the smartphone market.

The Shift From Desktop to Mobile

With the sharp rise in mobile sales, it’s no surprise that email consumption on mobile devices is following a similar trend. More than half of mobile users in Japan read email on their device, while around 40% in the U.S. read email on a mobile device.

Mobile email open rates increased 34% in the last six months of 2011, according to a study by ReturnPath. Compared to mobile, desktop email opens dropped by 9.5%. Similarly, email open rates via webmail decreased by 11%.

There certainly seems to be a big shift happening towards email consumption on mobile devices, which made us curious to learn more about user behaviors around this activity.

Good morning! 72% of the people tested read their emails in bed. Most people use their phones as an alarm clock, so the common morning action is to turn off the alarm and hit the email icon. Often readers haven’t even turned on the lights yet and are still cozy under blankets while reading your emails. If you send newsletters in the late evening or very early morning, you might want to rethink that bright purple and yellow graphic you’ve been using as a header graphic, as that would be a jarring visual for a reader who’s just waking up or getting ready for bed.