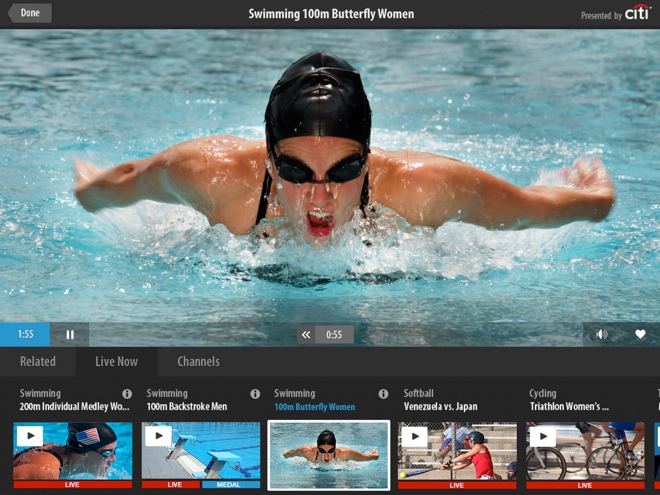 This year’s Summer Olympics won’t just have you glued to your TV: NBC Olympics and Adobe today announced the first two official Olympics apps that will allow you to view live video, highlights, news, and more on your smartphone or tablet. The NBC Olympics and “Live Extra” apps make extensive use of Adobe technology, hence the partnership. For example, NBC Olympics was able to use Adobe Air to reuse existing code across the iPhone, iPad, and Android versions of the apps. The NBC Olympics app will offer highlights, schedules, columns and include a “Primetime Companion” feature that will augment the games as you watch on your TV. The NBC Olympics Live Extra app goes even further, giving cable and satellite subscribers the ability to stream more than 3,500 hours of content live. The app basically lets you watch everything happening at the Olympics, including the medal events, which could lead to frightening levels of Olympics obsession this summer. NBC Olympics also used Adobe Pass, the company’s “TV Everywhere” authentication service, to allow cable and satellite customers to easily log-in to access the live streaming content. While NBC Olympics likely would have been able to build the apps without Adobe, the partnership appears to have reduced NBC’s overall workload. And it cements Adobe as a company pushing the boundaries of digital media. Check out a short video announcing the apps below. Filed under: media, mobile, VentureBeat

Adobe and NBC team up for the first-ever Olympics apps