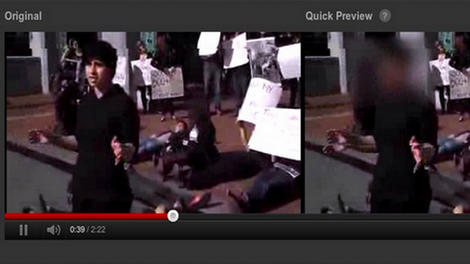 Google has incorporated a neat face blurring feature into YouTube in the hope of protecting the anonymity of protests in videos posted to the site.The video-sharing site says it is adding the tool following a recent observation from human rights campaigners WITNESS that no prominent sites offered the technology.The feature can be turned on by ticking the Blur All Faces box within the video enhancements tool on the site.YouTube uses the example of the Arab Spring protests in Egypt in a post on the YouTube blog.Protecting childrenThe company says, as well as safeguarding the identity of activists, the tool allows uploaders to avoid the potentially sensitive issue of uploading childrens’ faces for the world to see. “Whether you want to share sensitive protest footage without exposing the faces of the activists involved, or share the winning point in your 8-year-old’s basketball game without broadcasting the children’s faces to the world, our face blurring technology is a first step towards providing visual anonymity for video on YouTube,” said the blog post.YouTube points out that the tech is still in the development, so may not be 100 per cent accurate immediately and advises unsatisfied uploaders to keep their videos private.Visual anonymityThe company says it is proud to be a home for activist videos and says its new tool may encourage people to speak out against oppression without fear of reprisal.”Visual anonymity in video allows people to share personal footage more widely and to speak out when they otherwise may not,” the blog post continues.”Because human rights footage, in particular, opens up new risks to the people posting videos and to those filmed, it’s important to keep in mind other ways to protect yourself in the people in your videos.”YouTube is proud to be a destination where people worldwide come to share their stories, including activists.”

Split your work & personal lives with Divide for the iPhone