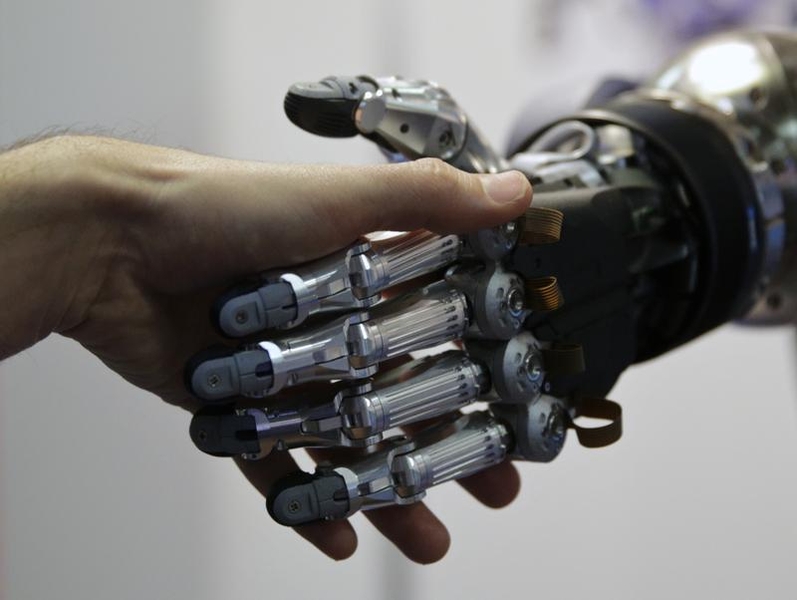 What would this really mean for “us” as individuals and for our economy?

1. Will robots be our peers?
The boundary between human and machine is becoming increasingly tenuous. The possibilities for enhancing ourselves might increasingly allow us to work like machines. Robots themselves might soon be endowed with traditional human attributes such as cognition and emotional intelligence, allowing them to mimic the most complex human activities. Thus, we might have to rethink not only what it means to be human but also the nature of our competitive advantage in the labor market and our place alongside machines. Which jobs will we need other humans for? Which skills will we value most? And if work became mostly obsolete, what then will be our primary occupation, how will we earn our livelihoods and how will we redefine success?

2. Will schools become implanted?
The question of which work skills will be most coveted in the years to come embodies one of three dynamics evolving in parallel that might deeply reshape the ways we learn. A second dynamic considers that our healthy and active life expectancies might be significantly increased to well above 100 years. The third takes note of how information and educative tools are becoming increasingly ubiquitous and universally available: online, on mobile devices and even by way of wearable electronics. As result, we need to rethink the ways in which we prepare ourselves to enter and remain relevant in the job market. What will we learn, how and when? Will we still receive our central education from childhood until our mid-20s or will we continually need to be retrained? How will vocational training evolve?

3. Will technology determine social class?
Whether technology leadso decreases or increases in social and economic equality is an ongoing debate for which the jury is still out. This discussion becomes increasingly important, however, as the number of technologies shaping our lives grows. Beyond current drivers of equal opportunity such as access to health care and education, the lack of access to technology might soon become the foremost driver of inequality. Which economic systems will be most successful in providing equal access to the social and economic benefits of technology?

4. Will “prosumers” oust companies?
Technology is said to have made the notion of “privacy” a relic of the past whereas transparency seems to have become the new normal. Other technological advances will allow for a greater decentralization of production means. Through 3-D printing and the “Internet of things” many marginal costs could be cut such that prices and, subsequently, profits would gradually disappear. This sort of “zero marginal cost society” could potentially usher the rise of “prosumers”: people who both produce and consume at the same time without either generating costs or profits. Under such a scenario, how would businesses make profits and will profits still be the main business purpose? Will intellectual property rights lose relevance altogether or will they become business’s only valuable assets—for instance, selling the right to print products at home? Which insurance schemes will we favor (insurance against hacking, for example), and will risk-pooling dynamics change?

5. Will there be anything left to transport?
Technology might soon allow us to mine metals from desalination brine, produce clean energy from wastewater and grow food in labs. In addition, as mentioned above, consumers will be increasingly offered opportunities to become more active prosumers. Finally, automation and robots might make outsourcing labor to low-cost countries increasingly irrelevant. All of these aspects point in the direction of an increased localization of production. How will this impact trade schemes and global economic relations? How will migration patterns evolve? How will the centers of economic activity change?

5 questions to ask about emerging technologies