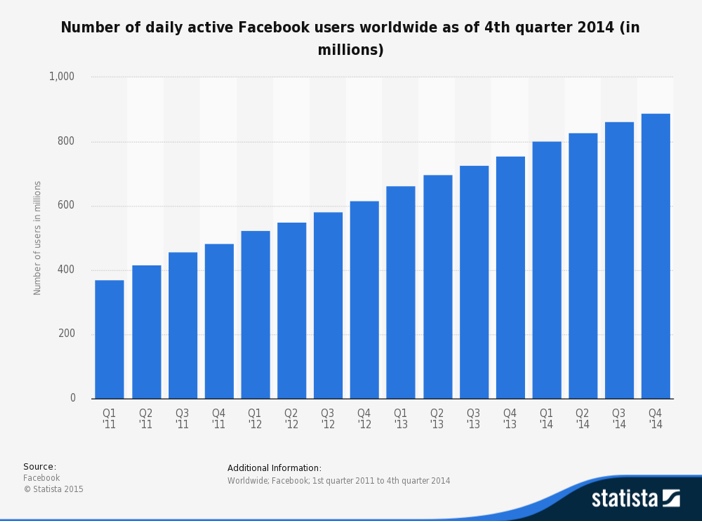 It seems that just about every major tech company this week announced their latest financials, but overshadowed by the news of Apple’s rise and Samsung’s struggles, Facebook also revealed that it now has 1.39 billion actively monthly users.

Facebook used by one in five people on earth

Facebook Inc. defines “active monthly users” as people who log into the social network site once a month or more. So, with 7 billion people living on the planet, that means around 20% (19.8%, to be precise) of people are using it.

More than half of the people using Facebook log in every day, because it was also reported that there are 890 million daily users, and most of those (745 million, or around 84%) check the site on their mobile phones.

Those are some pretty impressive numbers. The number of Facebook users on mobiles is nearly the same as the number of people who don’t have safe drinking water (according to Water.org).

Mark Zuckerberg has repeatedly said that Facebook is primarily a mobile first company, especially considering that 526 million people access the site only on their mobile phone. The company has also done a lot recently to ensure that the experience of Facebook on smartphones is optimised for the device’s capabilities. Additionally, Facebook Lite is designed for those people in developing countries who have lower-specced devices, ensuring that the user experience is still good.

Facebook is an Internet and mobile giant, but that hasn’t stopped criticism that the younger generation in particular are starting to leave the popular site. Zuckerberg appears to be focusing more on developing markets and expanding Internet access around the world, rather than worrying too much about people leaving. The company has ambitious plans to use drones, lasers and satellites to connect much for the world to the Internet, similar to SpaceX’s plan to launch thousands of satellites and balloons into space to get everyone online.

Are you an avid Facebook user? Have you left the site recently for one reason or another? Let us know in the comments…

Welcoming Facebook’s announcement that it has finally closed the accounts of senior military officers in Myanmar who had been blamed for the ethnic cleansing of the country’s Rohingya Muslim minority, Reporters Without Borders (RSF) calls on the social networking giant to act transparently in future. END_OF_DOCUMENT_TOKEN_TO_BE_REPLACED