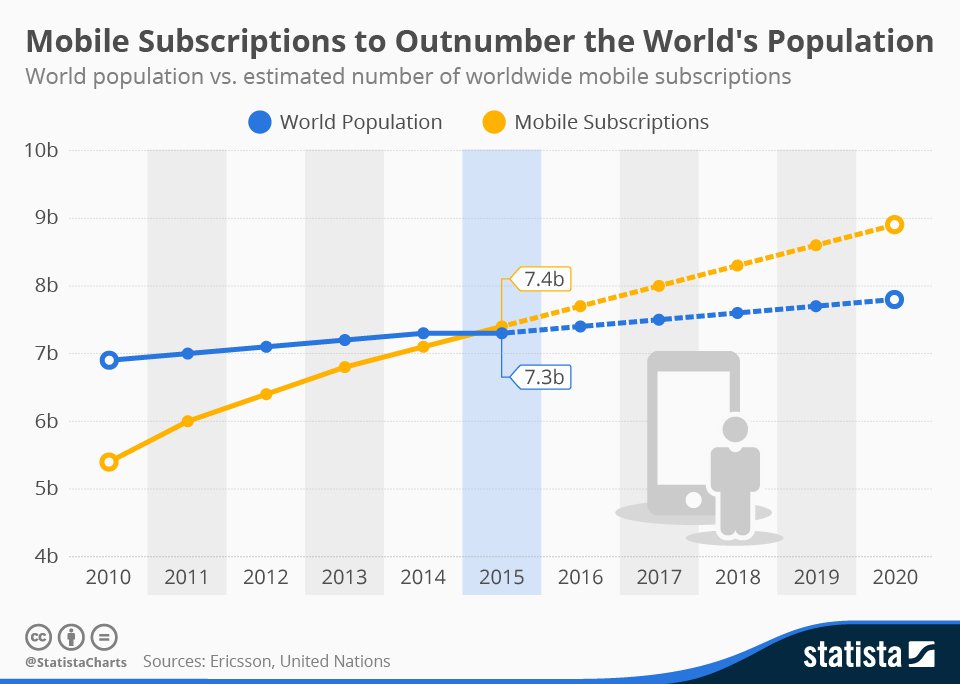 According to Ericsson’s most recent Mobility Report, the number of mobile subscriptions now outnumbers the world’s population.

According to Ericsson’s mobility report, the number of mobile subscriptions stood at 7.3 billion at the end of September and will grow to 7.4 billion by the end of the year.

Meanwhile, the world’s population will climb to 7.35 billion by the end of 2015, according to the United Nations.

The fact that many people have multiple active or inactive subscriptions more than makes up for the many people still living without a mobile phone.

The number of mobile subscriptions stood at 7.3 billion at the end of September and will grow to 7.4 billion by the end of the year.

Smartphones accounted for close to 75 percent of all mobile phones sold in Q3 2015, compared to around 70 percent during Q3 2014.

compared with around 40 percent in 2014, leaving considerable room for further uptake.

The number of mobile broadband subscriptions is growing globally by around 25 percent year-on-year, increasing by approximately 160 million in Q3 2015 alone.

The number of mobile subscriptions exceeds the population in many countries.

This is largely due to inactive subscriptions and multiple device ownership, e.g. for business and private use, or to optimize pricing by using different operators for different calls (this is common for example in parts of Africa).

In developed markets, users add devices such as tablets.

Smartphones make up the majority of mobile broadband devices today and subscriptions are expected to almost double by 2021. This is due to greater affordability in developing markets such as Asia Pacific, the Middle East, and Africa.

They account for an overwhelming share of all broadband subscriptions. Mobile broadband will complement fixed broadband in some segments, and will be the dominant mode of access in others.