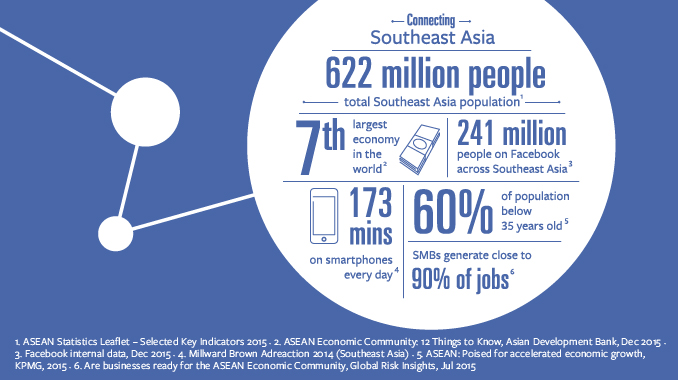 Facebook has announced that they now have more than 241 million users across South East Asia – well over a third of the region’s total population.

When you take into account the fact that a significant portion of the population is aged below 13 (the age at which users can sign up for Facebook) and some regions in the sector don’t have access to the internet, that number becomes even more impressive.

Facebook is huge in the South East Asian market – and by extension, the wider world as a whole.

“Southeast Asia is a dynamic mobile first region, and the fastest growing for Facebook. Connecting the more than 241 million people in Southeast Asia to the friends and family, businesses and moments that matter to them is at the core of everything we do. We are committed to investing in resources and expertise to help our partners in Southeast Asia grow and achieve measurable business results,” said Kenneth Bishop, Managing Director, Southeast Asia, Facebook.

Facebook’s also reported that 94% of users in the region access the platform via mobile device, while in addition to Facebook itself, Instagram’s also growing – 22 million Indonesians are now active users of the visual platform.

More broadly, international connectivity is also improving, which is a key part of Facebook’s wider goal to ‘connect the world’. A new study from McKinsey has shown that half of all people on Facebook are now connected to someone in a different country, a figure which has tripled in the past year.

People in South East Asia are also actively engaging with business on the platform, with Facebook noting that: