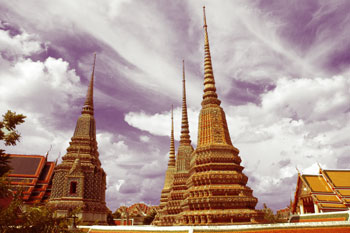 High-level discussions are underway across all sectors of the Thai travel and tourism industry to facilitate a quick recovery from the political unrest that led to significant declines in visitor arrivals in April and May 2010. A range of strategies, activities and projects are being discussed among the private and public sectors as well as in cooperation with government agencies responsible for other economic sectors, which were also affected.

The Royal Thai Government has given full support to a quick recovery of the Thai travel and tourism industry in recognition of its importance to Thailand’s economy as well as the fact that it was the worst affected of all business sectors. According to official data, international passengers arriving at Suvarnabhumi International Airport fell by an average of 20% over May 2009 and by 30% over May 2008. In the period of 18-24 May, 2010, alone, daily arrivals declined by an average of 12,000 – 14,000 over normal.

However, the number of international passenger arriving at Phuket International Airport rose by 61.15% to 88,126 during 1-28 May 2010. Since January 2010, the number of international passengers arriving at Phuket International Airport showed good growth: 35% in January, 70% in February, 39% in March and 39% in April.
Phuket is Thailand’s largest island and most popular international beach resort. It is now the country’s second largest international gateway by air and has become a major hub for regional flights from the ASEAN countries and Australia. It is also attracting numerous charters from Europe.At the moment, private sector associations are busy availing of the financial assistance measures being prepared by the government to help businesses, especially the small and medium sized enterprises, which were affected directly by the conflict. These include straight cash hand-outs, extension of low-interest loans, etc, which are mainly designed to ensure that businesses remain solvent and do not layoff staff.
The proposed tourism recovery packages have to be carefully planned to ensure the most effective returns on investment, especially in view of the fact that Thai tourism is now in the low season, when the traditional sources of visitor arrivals become substantially different from those in the high season. Arrivals from Asia and the Middle East become far more important in this period than those from Europe and North America.

In the immediate term, maximum effort is being directed towards reviving the domestic market, which has proved to be a significant saving grace and source of quick business in facilitating recovery from past crises; such as, the downturn caused by the global financial turmoil in 2008-09.

Hence, the Thailand Tourism Festival (TTF), to be held between 9-13 June at the Impact Muang Thong Thani, will highlight the country’s 72 provinces. The Thailand Convention and Exhibition Bureau (TCEB) is also joining the effort by encouraging Thai companies and government agencies to hold their meetings and conferences in the provinces. Under the overall goal of rebuilding confidence in the Thai tourism industry, TAT is planning to make better use of online channels and social media, work in tandem with the private sector to launch special packages and promotions, and maintain a focus on short-haul markets like China, Hong Kong, Japan, South Korea and Taiwan.
A number of short-term tactical measures are being planned; such as, website competitions, travel awards, lucky draws, and special offers targeted at specific customer target segments in the vast databases of credit card companies. The traditional marketing themes, such as “Amazing Thailand”, will remain unchanged as will the core message that Thailand remains an excellent value-for-money destination. The many special offers now set to be launched across the board will only reinforce this core message. TAT will also maintain its focus on the country’s long-standing tourism “strengths”; such as, Thai hospitality, Thainess, culture, and the environment.

Many of the traditional measures like waiving of visa fees and special concessions given to the airlines on landing charges have been extended beyond their expiry date of last March. The Thailand Travel Mart 2010 (TTM), the country’s leading home-based travel event, has been postponed to 8-10 September, 2010. More heavy-duty marketing campaigns and stepped up fam trips for travel agents, media, and MICE events organisers will be deferred until the end of the year.

The most cost-effective means of marketing today is social media; such as Facebook and Twitter, which is being used by both the TAT Head Office and all overseas and domestic offices. TAT also sees this as an opportunity to expand its presence into new markets with future potential; such as, the Central Asian Republics, North African countries, and the Middle East. This can be done by working in cooperation with the Gulf carriers like Emirates, Etihad, Qatar Airways, and Gulf Air. Other new markets showing considerable promise are Iran, Turkey, and Israel.
All of these can be developed by improving flows of information, facilitating visa processing times, doing joint marketing with airlines, and organising Thailand product seminars and road shows. Thai tourism industry leaders are confident that the global and local political and economic situation will remain stable over the next few months, and that the rebound should be in the second half of the third quarter. This will help meet the revised target of visitors arrivals for the year. This would be exactly in line with what happened in 2009, when the industry was affected by the global financial crisis in the first half and then generated a strong surge in the second half, with total visitor arrivals of 1.6 million in December 2009 being one of the highest monthly arrivals on record.

Tourism situation in Pukhet worse than after 2004 tsunami