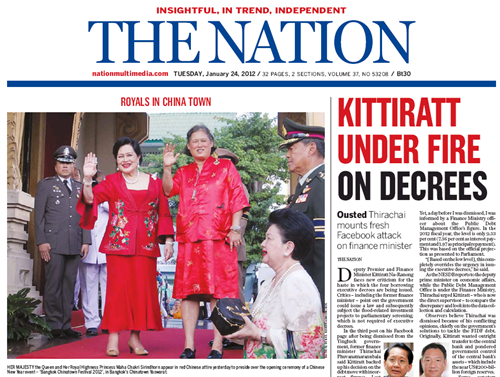 Thailand’s tourism ambiance during the Chinese Lunar New Year festival drew large numbers of Thai and foreign travellers streaming into the major southern province of Songkhla as well as the northern province of Chiang Rai.Somchart Pimthanapoonporn, president of the Hat Yai-Songkhla Hotel Association, said Tuesday that a large number of Malaysian and Singaporean tourists crossed the border to join activities in Songkhla during the Chinese New Year festival.

On average 10,000-20,000 Malaysians daily crossed the Thai-Malaysian border in Sadao district during the holiday, he said.Thanks to numerous visitors from the neighbouring country crossing the border to Thailand, the traffic near the border crossing on the Malaysian side was congested. A road was reportedly jammed pack with vehicles as far as 10 kilometres.

In the southern province of Satun, many domestic and foreign tourists were visiting islands around the Tarutao National Park, according to Panapon Cheevaserichon, assistant park chief.He said that ferry boat service took a full load of passengers with every trip and that operators had to provide additional boats to meet the passenger demand.

Elsewhere, cool weather in the northernmost province of Chiang Rai attracted a large number of visitors during the Chinese New Year. Many tourists visited the Mae Fah Luang Garden to enjoy decorative plants and winter flowers.

The Lunar Chinese New Year is one of the most important occasions in Thailand, particularly among ethnic Chinese Thai people.  (MCOT online news)

China has lifted its travel alert for Thailand over a possible terrorist threat, following the meeting between Prime Minister Yingluck Shinawatra and Mr. Guan Mu, Ambassador of the People’s Republic of China to Thailand, during the Chinese New Year reception at the Chinese Embassy on 18 January 2012.

Foreign Minister Surapong Tovichakchaikul expressed his appreciation to the Chinese Ambassador and the Chinese authorities concerned for the decision to lift the travel alert, which demonstrated the Chinese government’s confidence in the actions and measures taken by the Thai government.

The Foreign Minister also stated that this decision was good news for Thailand’s tourism, especially during the Chinese New Year holidays.As for other 19 countries which still retain their travel advisories and alerts for Thailand, most of which referred to the alert issued by the U.S. Embassy in Bangkok, the Foreign Minister expressed hope that these countries would take into consideration actions and measures taken by the Thai security agencies, as well as the latest situation in the country and consider lifting their travel advisories and alerts for Thailand, as China had done.

He said that the Ministry of Foreign Affairs has also been providing updated information on the current situation, along with the actions and measures taken by the Thai government, to diplomatic missions and international organizations in Thailand as well as to Thai embassies and consulates-general abroad, so that they may inform their respective host countries of the latest situation.

Moreover, Mr. Sihasak Phuangketkaew, Permanent Secretary for Foreign Affairs, had expressed concern over the U.S. Embassy’s travel alert with Mrs. Judith Cefkin, U.S. Chargé d’Affaires, a.i., during their meeting on 17 January 2012. The U.S. Embassy would consult with the U.S. government on the matter.