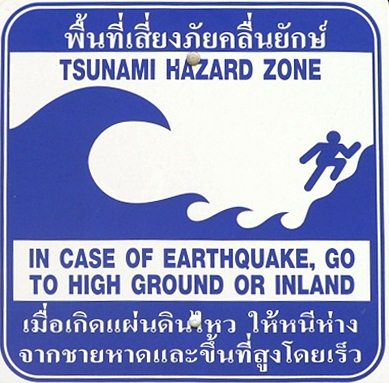 (TAT update). The magnitude 8.6 earthquake that occurred in the Indian Ocean about 500 kilometers to the west of Northern Sumatra, Indonesia on 11 April 2012, did not result in any tsunami reaching Thailand. Tsunami warnings that were issued for the provinces along Thailand’s Andaman Sea coast, including Ranong, Phangnga, Phuket, Satun, Krabi and Trang have been cancelled.

Residents and visitors who were evacuated to higher ground in these provinces as a precautionary measure have returned to coastal areas. The airports in Phuket and Krabi, which were temporarily closed, will resume operations on 12 April 2012. Tourists who were planning to visit the Andaman Sea coastal provinces during the Songkran Festival will find that conditions in the area remain normal.  Songkran celebrations elsewhere throughout Thailand were not affected and will take place as scheduled. :: Thailand Tourism Update::

Airports of Thailand President, Flying Officer Anirut Thanomkulbutra, said late Wednesday that, after the National Disaster Warning Center has lifted the tsunami warnings in the country, the Phuket International Airport was promptly re-opened again at 8.30 pm.

Earlier, Phuket Airport was scheduled to become operational again on Thursday morning after it was temporarily closed since 4 pm of April 11th.

The temporary shutdown has initially stranded more than 1,000 passengers, but the service resumption has helped parts of them to fly out of Phuket by Wednesday night.

Mr. Anirut said that, for a number of passengers who could not continue their journey as planned, Phuket Airport has coordinated with various hotels to provide accommodation for them.

In addition, for passengers on a Thai Airways flight, originally scheduled to take off from Phuket at 6 pm of Wednesday, the flag carrier has confirmed that it will send a plane to pick them up at 11 am of April 12th (Thursday).