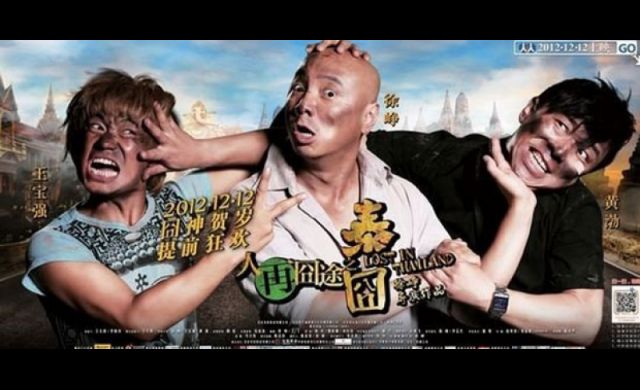 The Thai tourism industry hopes the popularity of a new film, “Lost in Thailand”, that is sweeping China, will attract more Chinese tourists to Thailand next year.

Chinese visitors to Thailand this year number more than 2.5 million, a 56 per cent increase from last year’s 1.7 million

Filmed mainly in Bangkok and Chiang Mai, the movie is a compilation of stories based on the real experiences of expats who have chosen Thailand as their home. It has become a record-breaking film, grossing the highest revenue in China this year.

Sisdiwat Chivarattanaporn, president of the Association of Thai Travel Agents (ATTA), said the extraordinary response to the movie will likely interest Thai and Chinese travel agents to use the locations as attractions for Chinese tourists.

Chinese visitors to Thailand this year number more than 2.5 million, a 56 per cent increase from last year’s 1.7 million. Their traditional and favourite destinations are Bangkok, Pattaya, Ayutthaya and Phuket.

Mr Sisdiwat said the movie should draw the Chinese to a new attraction – Chiang Mai — adding that new activities seen in the film such as having massage at a spa or riding a “tuk-tuk” could be included in the sight-seeing programme. (MCOT online news)

via ‘Lost in Thailand’ could draw more tourists to the kingdom | MCOT.net.

She said that political stability and the increasing popularity of tourist attractions in Thailand have contributed to the tourism boom, while the ongoing Sino-Japanese conflict has diverted travelers from both countries to Thailand.