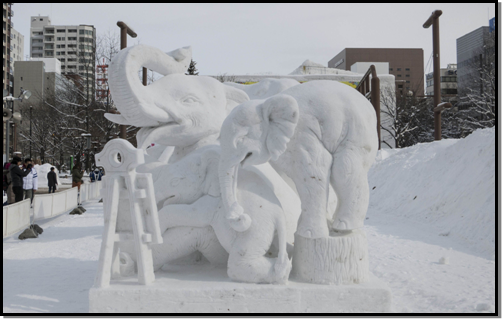 The title of Grand Champion has again been bestowed on Thailand’s master ice craftsmen as they produced the winning entry in the 40th International Snow Sculpture at the 64th Sapporo Snow Festival, Japan, held during February 5-11, 2013.

For this year, there were 11 international teams participating in the completion. The Tourism Authority of Thailand (TAT) sponsored an ice sculpting team and entered the snow statue The Artist from the Wild which represented the figures of 4 elephants, the national animal of Thailand.

The statue depicted the elephants holding a paintbrush in their trunk and doing a delicate painting. The act symbolized the amazing artistic skills of Thai elephants that are in contrast to their size and strength. Such unique displays can only be found in Thailand. Elephants in Thailand are also very close to people as they are treated as members of mahouts’ family. The sculptor team included Mr. Kusol Bunkobsongserm, Mr. Kritsana Wongtes and Mr. Amnoaysak Srisuk.

Chinese Year of the Snake kicks off in Thailand