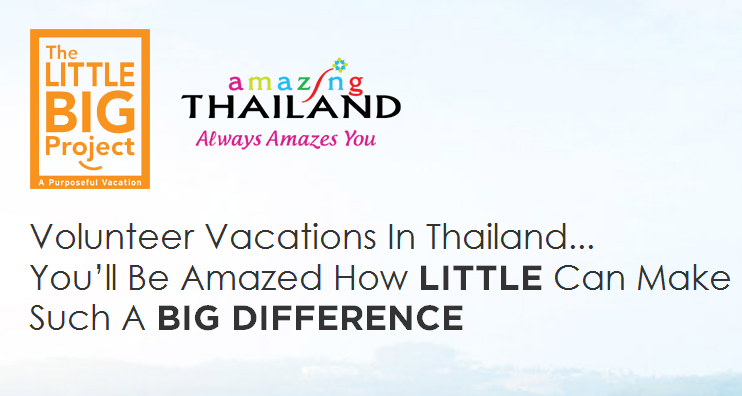 The Tourism Authority of Thailand (TAT) has launched a global digital marketing campaign to promote Voluntourism, which affords travelers the opportunity to have a life-changing adventure: A Two-weeks Volunteer Vacation in Thailand!!

Called “THE LITTLE BIG PROJECT”, the campaign is designed to tap into a growing industry trend known as Volunteer Tourism, or Voluntourism – travellers seeking “A Purposeful Vacation” that goes well beyond more than just having fun during a holiday abroad. Thousands of active travelers from all over the world are looking to make a big difference through doing little things such as preserving the environment, sharing their skills or contributing to local communities.

Mr. Pongsathorn Kessamli, Deputy Governor for Policy and Planning of Tourism Authority of Thailand, notes that, “Volunteer Tourism, or Voluntourism, is now very popular with youth travelers. It is also gaining popularity amongst many retirees who are still fit and active, with time on their hands. They want to make the world a better place, and seek to do something meaningful when they travel.”

The mission of THE LITTLE BIG PROJECT is to help others, but it is also a competition: one overseas visitor and one Thai will team up for 2 weeks to work on anything from helping Save the Elephants at a nature park in Chiang Mai, to a community development project for Hill Tribe Children, to Marine Conservation in Koh Talu.

Anyone interested in participating should create a 1-minute English-language digital video to introduce themselves and briefly discuss why they’re uniquely qualified to partake in the campaign in Thailand. Applications will be accepted through May 20th, 2013, and the 10 best video submissions will be selected – 5 from Thai citizens and 5 from overseas registrants.

An online registration form can be found at www.TheLittleBigProjectThailand.com where entrants can provide a link to their YouTube-hosted video.

They will also have the chance to share their philanthropy efforts with a world-wide audience by making blog posts, uploading photos and videos, and telling their story through social media. Prizes will be awarded, too!:

The team with the most votes for their blog will win $5,000 USD for donation to their project for continued funding, plus a hotel voucher valued at $500 USD for their personal enjoyment

The visiting competitor whose video receives the most views will win an Apple gift card worth $1,000.

Said Mr. Pongsathorn, “The TAT believes THE LITTLE BIG PROJECT will give people looking to do something different on vacation an opportunity to have a life-changing adventure. Voluntourism gives this niche market that opportunity. The goal is to connect these tourists to Thais at the local, community level, which will bond them much more intimately to Thailand than standard tour packages.

In addition to the competition, TAT is forging partnerships with key voluntourism agencies such as www.responsibletravel.com, www.volunteeringsolutions.com, www.planmygapyear.co.uk, www.openmindprojects.org, www.universalgiving.org, www.kayavolunteer.com, and www.gapyearthailand.org.uk. They ­­­will help TAT promote Voluntourism in Thailand by offering up to 50 programs for voluntourists, as well as special hotel deals offered by www.hotelthailand.com until July 31st, 2013.