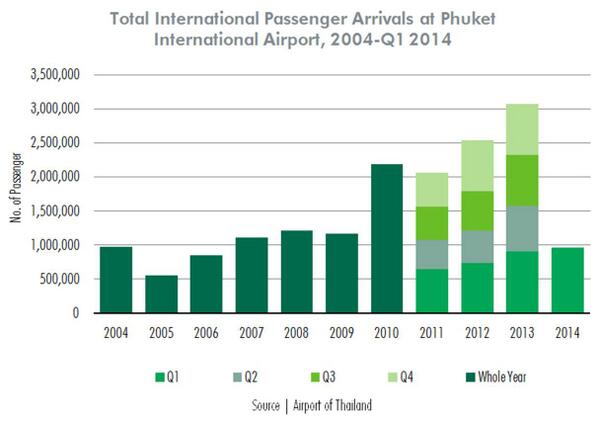 According to two surveys by property consulting firms CB Richard Ellis (CBRE) and C9 Hotelworks, Phuket’s tourist industry remains robust with passenger arrivals to the island having surged 26 per cent and hotel occupancy rates reaching more than 80 per cent in the first quarter of this year.

These surveys confirm that the recent political situation in Thailand has not negatively impacted the tourism industry in Phuket, which remains one of the kingdom’s most popular beach resort destinations.

The CBRE survey for the first quarter of this year found that the number of international arrivals in Phuket increased by 6.9 per cent to 962,953 visitors. The research attributed the increase in direct international flights to Phuket as contributing to the rise in visitors.

For the first quarter of this year found that the number of international arrivals in Phuket increased by 6.9 per cent to 962,953 visitors

Meanwhile, the March 2014 survey carried out by C9 Hotelworks found that Phuket International Airport had recorded a consistent increase in passenger numbers of around 10 per cent per year between 2004 and 2013. In 2013, the Airport recorded 3.2 million international arrivals, representing a 26 per cent year-on-year growth.

Chinese and Russian tourists are currently the two biggest tourist markets for Phuket, making up some 45 per cent of the total international passenger arrivals, a rise from 36 per cent in 2012. In the first quarter of this year, the numbers of travellers from China and Russia reached 225,949 and 228,691, respectively. Three other major sources of tourists to Phuket are Australia, South Korea and Malaysia, according to C9 Hotelworks.

Both firms concluded their surveys by forecasting that the number of international visitors to Phuket will continue to grow into the future.

In terms of the hotel occupancy rate, the CBRE survey found that the average occupancy of high-end accommodation (those hotels charging 2,000 Baht or more per night) reached more than 80 per cent in the first quarter of this year.

On the supply front, Phuket is expected to see eight (8) new hotel openings with a total of 971 rooms. The island currently has 47,112 hotel rooms, according to findings by C9 Hotelworks.

Mr. Thawatchai Arunyik, Governor of TAT said, “These figures for tourist arrivals in Phuket for the first quarter of 2014 are very positive and show that visitors are confident that Thailand is still a safe and attractive destination to come for holidays and to travel to.”

The TAT Governor added, “Now that the curfew has been lifted nationwide, many leading tourist destinations as well as hotels, airlines and shopping malls are offering some great bargains to bring tourists back in larger numbers and restore visitors confidence in Thailand as an appealing and welcoming destination.”