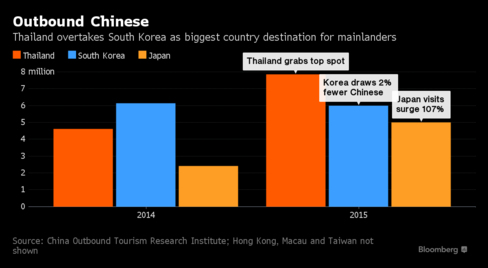 The mainland sent 7.9 million people to Thailand in 2015, an annual increase of 70 percent to become the top country destination ahead of Korea, which had 2 percent fewer arrivals, and Japan, where visitors more than doubled to 5 million.

That one-two-three ranking continued during last month’s Chinese Spring Festival, according to preliminary data reported by the People’s Daily newspaper.

The Thailand tourism industry has been defiantly strong despite challenges such as the Bangkok bombing at a busy central intersection last August which killed 20 and injured more than 120 people, reported Reuters.