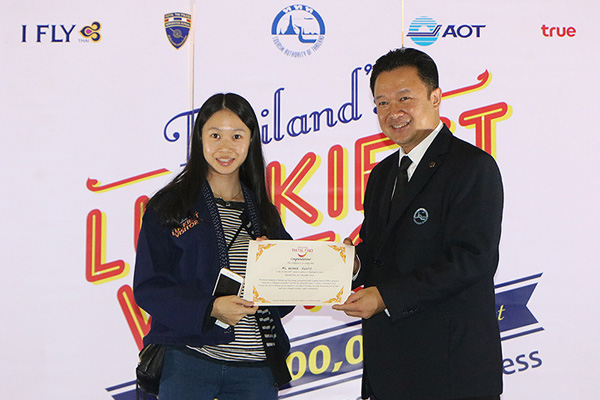 The “Thailand’s Luckiest Visitor – The Amazing, Smashing Success” was Ms. Huang Junyi who flew in to Bangkok’s Suvarnabhumi Airport from Guangzhou, China on the auspicious date of 5 December, 2016.

The “Thailand’s Luckiest Visitor” campaign was launched in 2015 to welcome and reward every millionth visitor to Thailand from June to December. The campaign was a great success and garnered interest from the public and media organisations across the world, boosting Thailand’s tourism sector and brand image. It has been brought back in 2016 to welcome the 30th and 31st million visitors and will continue till the end of 2016.

To boost tourism numbers, various initiatives have been put in place to encourage tourists to visit and spend. This includes the waiver of tourist visa fees for visitors from 19 countries from 1 December, 2016, to 28 February, 2017, and the price of visas issued on arrival will be halved. To encourage more domestic travel, a long New Year holiday of four days including 31 December, 2016, and 1 to 3 January, 2017, has been confirmed.

Thailand plans for significant events in December and New Year 2017