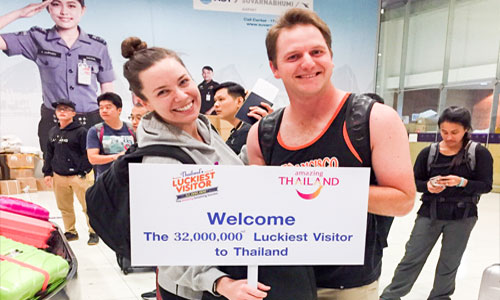 Mrs. Shelby Pastor from the USA was named “Thailand’s Luckiest Visitor – The Amazing Smashing Success” and was greeted by executives and officials from the Tourism Authority of Thailand (TAT), Thai Airways International, True Corporation, the Airports of Thailand, and the Immigration Bureau.

Mrs. Shelby Pastor, Thailand’s 32 Millionth Visitor of 2016 is visiting from San Francisco. Her husband is a pro golfer and the couple has chosen Thailand for its wonderful golf courses. They will spend time at the Suvarnabhumi Golf Country Club during their four week stay in the kingdom.

Ms. Jittima Sukpalin, TAT Executive Director of the Americas Region said, “Thailand has successfully advanced towards our expectations for 2016. To date, we have already welcomed a total of 32 million visitors coming to enjoy the kingdom’s amazing attractions, vibrant culture and warm hospitality.

We warmly welcome Mrs. Shelby Pastor as our 32 millionth guest for this year as well as each and every single traveller coming to Thailand, all of whom we are confident that they will enjoy a heartfelt welcome by the Thai people and will go home with many happy memories of the unique local Thai experiences.”

Mrs. Shelby Pastor, the 32 millionth visitor flew in from San Francisco and arrived in Bangkok on 27 December, 2016. As “Thailand’s Luckiest Visitor – The Amazing Smashing Success”, she was presented with two economy-class return tickets to Thailand and two domestic return tickets (Bangkok-Phuket), valid for a year.

She was also given a voucher for a five-night stay in one of Thailand’s luxury hotels in Bangkok or Phuket, a mobile phone with a 4G sim card and seven days of Internet usage, a certificate to mark the occasion, and a luxury limousine drive to his/her Bangkok hotel.

Bangkok has long been one of the world’s most popular cities for travellers. With its long history, stunning temples and attractions and amazing culinary delights, the city is a tropical playground that offers luxury, adventure and the best shopping in Asia. It is also a travel hub, so visitors can easily fly or travel from Bangkok to all parts of Thailand and Southeast Asia.

The “Thailand’s Luckiest Visitor” campaign was started in 2015 to recognise and reward every millionth visitor to Thailand starting from the 13 millionth to 29 millionth during June to December. The campaign was hugely popular with tourists and the media and has enhanced Thailand’s brand image.

In 2016, Thailand is expecting to earn a total international tourism revenue of around 1.62 trillion Baht (US$ 46 billion), representing a year-on-year increase of 11.68 per cent over 2015.

To boost tourism numbers, several initiatives have been put in place to encourage international visitors to come to Thailand and explore its myriad attractions. This includes the waiver of tourist visa fees for visitors from 19 countries from 1 December, 2016, to 28 February, 2017, and the price of visas issued on arrival will be halved.

A World Bank economist, Kiatipong Ariyapruchya said that the influx of tourists is putting infrastructures, like airports, under pressure.

“Bottlenecks are building up in destinations like Chiang Mai, Bangkok and Phuket, while infrastructure still hasn’t expanded,” Ariyapruchya said.

According to Yahoo News, he also noted that Thailand’s new destinations must be introduced and closely monitored in order to support tourism that is sustainable.

Central Bangkok lights up for the holiday season 2016-2017