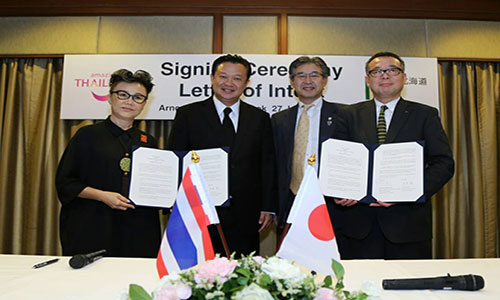 The Tourism Authority of Thailand (TAT) and the Hokkaido Government have renewed their long-standing cooperation agreement to promote two-way travel and tourism between the two countries.

The former agreement was effective from 5 February, 2013, to 31 March, 2016. The latest updated agreement expands the range of tourism promotional marketing activities and channels for exchanging and publishing tourism information to include online and offline media.

TAT continues to pursue a proactive marketing strategy to tap the Japanese market with the campaign of “Discover Amazing Stories in Amazing Thailand” by focusing on “The Unique Thai Local Experience”. This year, TAT is also focussing on promoting Japanese ladies, youth, sports tourism (golf and marathons), and incentive groups.

Thailand and Japan celebrated the 129th anniversary of diplomatic relations in 2016.

Last year, Japanese visitor arrivals to Thailand totalled 1,438,580, up by 4.14 percent over 2015, generating an estimated 61.432 billion baht in tourism revenue, up by 6.3 percent over 2015. Mrs. Srisuda said, “TAT believes our cooperation with the Hokkaido Government will help us achieve our target of a 7.79 percent increase for Japanese visitors in 2017.”

TAT has two offices in Japan; namely, Tokyo and Osaka, which undertake a series of activities every year to ensure a steady flow of visitors to Thailand.

At present, there are a total of 7 direct scheduled flights weekly between Bangkok and Sapporo city in Hokkaido operated by Thai Airways International.

Around 90 percent of Japanese travellers are F.I.T., who stay in the country for about 8 days per trip. Bangkok is the most favourite destination in Thailand for Japanese travellers followed by Pattaya, Phuket, Chiang Mai, and Ayutthaya. The top 3 purposes of visit are for a holiday, business, and MICE, respectively.