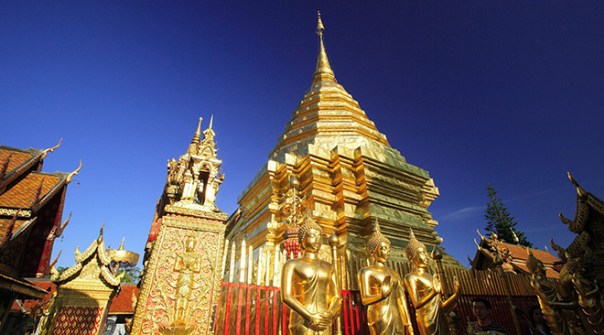 Northern Thailand, with its hills and invigorating breezes, feels culturally distinct from the rest of the kingdom.

From the 13th to 18th century, the Northern provinces made up the kingdom of Lanna, which has its own, art, architectural styles and language, while local hill-tribes, with their distinctive customs and costumes added to the cultural mix.

The region was once part of the Golden Triangle, where illegal poppies were farmed. But King Rama IX helped locals to diversify into other crops so fruit and vegetables now thrive where opium once flourished.

Now Chiang Mai and Chang Rai boast a laid-back atmosphere, amazing art-spaces, restaurants and attractions which can be enjoyed by anyone with a few days to spare.

So, take a morning flight from Bangkok to Chiang Rai for a taste of Lanna.

The cool air makes Doi Tung the perfect place to grow temperate plants. At the Mae Fah Luang Garden, the late Princess Mother’s pride and joy, there are petunias, azalea and orchids growing with ornamental and rock gardens, with streams and statues adding to the beauty.

From Doi Tung, do stop by at Ban Dam, the masterpiece of Thailand’s national artist Thawan Duchanee (1939-2014). The museum boasts old Thai houses, Lanna carving and religious imagery juxtaposed with futuristic buildings. These art instalments make Ban Dam a showcase for the work of this much-missed creative mind.

The main building is the black house itself which resembles a temple and contains items of furniture, made up of buffalo horns, as well as crocodiles, snake skins and skulls. Some art lovers interpret Thawan  Duchanee’s work as being a reminder of the things we leave behind and a warning to make the most of our lives.

Continue the journey to stretch your legs and enjoy the views at Singha Park, Thailand’s largest tea plantation – producing over 400 tonnes of Oolong tea a year. Fruit and flowers are grown here too.

The Park offers friendly-family activities including cycling, a zip line, and a petting zoo with giraffes and zebras. An electric tram takes you around, if you don’t fancy cycling. Enjoy a meal at the park’s Bhu Bhirom Restaurant which offers delicious dishes and magical views.

Shows take place at 19:00, 20:00, 21:00 and 24:00 when for several minutes the clock is illuminated changing colour while music plays, and there’re mythical creatures peering out from the glinting stucco. Nearby bars put out tables, so sit down and enjoy the show. Then, visit the nearby walking-street market, and seek out tasty street foods and local souvenirs.

Rise early to visit Chiang Rai’s iconic attraction, Wat Rong Khun – better known as the White Temple. The glistening structure is another masterpiece of Chalermchai Kositpipat, who wanted to ensure that the reign of Rama IX was marked with its own artistic style.

The gleaming building is decorated with creatures from Thai and Buddhist mythology and you enter the main Ubosot over a bridge representing cycle of rebirth. Do visit the temple’s lovely lavatories, which are found behind a gleaming gold facade and intricately decorated. Work on the temple will go on until 2070 so make a donation to this amazing art project.

Artist Chalermchai Kositpipat is often spotted around the White Temple, supervising the construction

It’s now time to enjoy the three-hour drive to Chiang Mai along one of the most scenic roads in Asia. Why not stop off for a Lanna lunch on route?

Here they practice a form of Thai massage known as ‘Yam Khang’. This unique massage isn’t for the faint-hearted: the experienced masseuses dip their feet healing herbs and oils before exposing them to flaming coals. They then walk the aches and pains from your body, pinpointing stress-points and massaging them away.

There’s a lot to do in Chiang Mai town, which boasts eateries, galleries and some of Thailand’s loveliest temples. But don’t forget to visit the Sunday Walking Street.

Local artists and craftspeople exhibit and sell their work here, and you can buy original fashions, jewellery, silk items and tribal decorations. There are also street performers, and singers. So sit in a nearby cafe and watch the colour and action.

If you don’t have time to trek in the Chiang Mai hills, you can get back to nature with a morning visit to the Queen Sirikit Botanical Garden, which is established to preserve Thailand’s biodiversity. There are thousands of different types of flowers and plants growing in the gardens and greenhouses and you can even walk in the tree-tops: the gardens are home to Thailand’s longest canopy walkway which stretches 370 metres through the tree canopies.

Then seek out the fresh fruits and fresh air of Doi Mon Chaem. This hillside project has glasshouses growing strawberries, olives and tomatoes and you’re free to wander around and sample the produce. Doi Mon Chaem is part of Nong Hoi Royal Development Project, which was established to encourage local farmers to take advantage of the climate to grow commercial crops.

Don’t miss the local go-karts. These rickety vehicles reach great speeds as they hurtle down a 400-metre slope and the white-knuckle ride is one of the North’s most unique experiences.

Before you head home, visit Chiang Mai’s Warorot Market to pick up souvenirs and handicrafts including items and cloth made by local hill-tribe people.