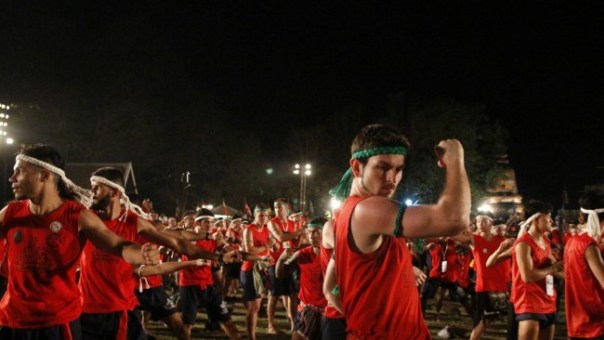 As well as taking part in the ancient ritual to pay respects to Muay Thai masters, attendees experienced different many aspects of Thai culture relating to martial art.

During the afternoon, international Muay Thai fighters and other visitors were able to enjoy the historic environs of Ayutthaya Historical Park and experience traditions, such as, Yantra tattooing and lettering.

There were also several Muay Thai exhibition fights as well as examples of other types of Thai martial art. There was also the chance for boxers to test their skill in fun contests and to meet their heroes, such as, renowned fighter Buakaw Banchamek.

The highlight was the moving ceremony itself during which the  1,400 fighters gave a traditional show of respect to Muay Thai masters and Thai Kings, including King Naresuan the Great.  Famous Muay Thai fighters Buakaw Banchamek, Samart Payakaroon, Anuwat Kaewsamrit and Saengmani Umkatongchiangmaiyim then led the boxers from 52 nations in the Wai Kru dance, which is an essential element of the Muay Thai tradition.

After the Wai Kru ceremony, the international Muay Thai fighters were treated to a welcoming reception and the dynamic “Amazing Muay Thai” performance.