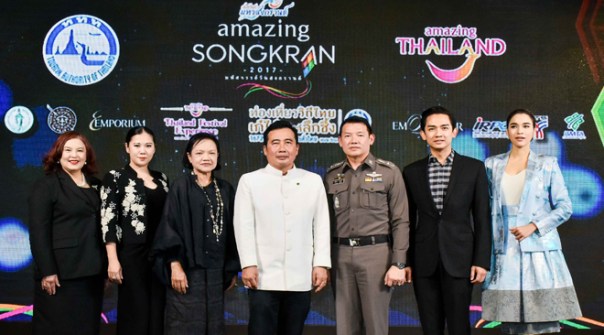 Thailand is preparing a series of Songkran 2017 celebrations, which will take place across the kingdom during 1-23 April, 2017. These colourful events have been planned so that all visitors and locals enjoy a memorable and safe Thai New Year.

Mr. Noppadon Pakprot (centre), TAT Deputy Governor for Tourism Products and Business, Ms. Pranee Sataya-Prakob (left), Deputy Permanent Secretary, Bangkok Metropolitan Administration, and Colonel Sitthiparp Baiprasert (right), Deputy Chief of Metropolitan Police Area 5, place flags on a Chedia Sai, which are made in the grounds of temples during Songkran as a way of replacing the earth taken away throughout the year on the shoes of people coming to pray.

“This year, TAT is emphasising the Thailand Festival Experience and will focus on enhancing the image of Thailand as a Quality Leisure Destination by offering “Unique Thai Local Experiences”.

In line with this, we’d like everyone to enjoy a wonderful New Year and to experience how Songkran is celebrated in different areas of the country. We will show visitors the unique local ways that people mark the Thai New Year and, we’ll be treating Bangkok to colourful parades and parties that showcase different facets of this cultural event.”

Songkran Splendours: Amazing Songkran 2017 will kick off with an Amazing Songkran Joyful Procession on 8 April 2017. This procession, from 17.30 to 20.30 Hrs. will head down Sukhumvit Road, starting from the Phrom Phong Junction and will finish at Pathum Wan Intersection.

Mr. Noppadon said, “The Amazing Songkran Joyful Procession is aimed at showcasing Thailand’s cultural diversity and the heritage of each region. Spectators lining the route will learn how the Songkran celebration has changed over the years and enjoy colourful performances.”

The procession will be in six parts: 1) Amazing Blossom of Siam; 2) Songkran Goddess, Krini Devi who represents the 2017 Songkran; 3) Myths and traditions of Songkran of the five regions of Thailand told in floral floats made of blooms from each region; 4) Green Songkran, represented by eco-friendly cars and the Earth of Green Songkran Show; 5) Songkran traditions of Thailand’s neighbours including Cambodia, Laos and Myanmar; 6) the final parade will showcase classic and distinctive cars from many parts of Thailand.

The Songkran Splendours: Amazing Songkran 2017 in Bangkok’s Benjasiri Park will show visitors some of the unique local experiences associated with Songkran. The event will be divided into Four Zones, each with demonstrations of culture and cuisine.

Zone 1 – is where visitors can pay respect to the Buddha image and experience the ceremony in which respect is paid to elders through the pouring of water onto their hands by younger family members. There will also be workshops on making scented water and flowers.

Zone 2 – shows the myths and culture associated with Songkran in each of the five regions such as Pee Mai Muang in the Northern region; Boon Duen Ha in the Northeastern region and Mon style activities from Pra Pradaeng in the Central Region where visitors get the chance to see people in local Mon dress. The Southern Region will showcase local costumes and fishing culture while the Eastern Zone will represent the celebrations of the Sri Maharaja Songkran Festival in Chonburi Province. Visitors in Zone 2 will get the chance to try charming local costumes and take selfies.

Zone 3 is where Songkran related snacks and desserts from all regions of Thailand can be tried, including a unique Thai dish to beat the summer heat or Khao Chae – steamed rice in jasmine-scented iced water served with savory accompaniments.

Zone 4 is the event’s main stage that will be featuring shows entertainment showing some of the many Thai activities that entertain people at Songkran. These include Thai Blind Boxing and a Miss Amazing Songkran International Beauty Contest to be held on 13 April.

For the Song Nam Phra, water is not poured onto the head of the Buddha image, rather onto the torso and body

For the Song Nam Phra, water is not poured onto the head of the Buddha image, rather onto the torso and body

The Songkran Splendours: Amazing Songkran 2017 ends on 13 April in time for the national Thai New Year holiday. This gives people inspired by the event, time to travel to different parts of the nation and experience a local Songkran in a traditional setting.

“The Songkran Splendours: Amazing Songkran 2017 as well as the Amazing Songkran Joyful Procession will allow visitors to enjoy a deep appreciation of Songkran in Thailand and understand how it differs so much from region to region while still uniting Thais in a spirit of respect and fun,” said Mr. Noppadon.