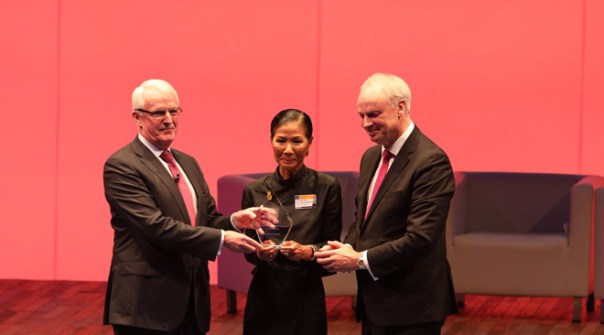 The event attracted more than 800 delegates, including well-known leaders, tourism ministers and diplomats as well as leaders in the tourism industry from around the world.

Mr. Gerald Lawless, WTTC Chairman said the Summit successfully achieved its objectives as a centre stage for global tourism leaders to discuss and debates issues relating to the sector. “I would like to thank our sponsors and hosts, the Tourism Authority of Thailand (TAT) and the Minister of Tourism and Sports. We’ve heard how fantastic the Thai people are, and we’ve all experienced so much ourselves in the last few days.”

This year the summit was addressed by Mr. David Cameron, former Prime Minister of the UK, and was opened by H.E. General Prayut Chan-o-cha, Prime Minister of Thailand. Other high-profile speakers included Dr. Taleb Rifai, Secretary General of the UN World Tourism Organisation.

H.E. Mrs. Kobkarn Wattanavrangkul, Minister of Tourism and Sports of Thailand expressed her appreciation to the WTTC for selecting Thailand and Bangkok to host such a ‘memorable, valuable conference’ and that this was a chance for Thailand to showcase what the kingdom as well as ASEAN is all about.

“It is such an honour on behalf of the Thai government and the Thai people that we can use the last two to three days to unite all the spirits of the people in Bangkok with all the delegates at the Summit,” she said.

The 2017 WTTC Global Summit, held at the Bangkok Convention Centre at CentralWorld, spanned two days and included talks from experts, roundtable discussions and Q&A sessions. This gave delegates and members of the international media the chance to experience the first-class planning and high-tech meeting facilities which have made Thailand the hub of business events in the region.

Delegates also got the chance to enjoy a showcase of unique local Thai experiences at a spectacular welcome dinner presided over by H.E. General Tanasak Patimapragorn, Deputy Prime Minister of Thailand. In addition, TAT treated delegates and their partners to tours which showcased Bangkok’s history and the rural Thai way of life. The Bangkok Medley Tour gave visitors the chance to explore Bangkok’s Rattanakosin Island in iconic tuk-tuks, while the Rustic Thailand Tour took them upcountry to visit floating markets and to enjoy canal-side life.

Mr. Yuthasak Supasorn, TAT Governor said, “TAT is proud to have been a host and sponsor of this event which won’t just boost the image of Thailand internationally, but also, thanks to the high level discussions which have taken place, will ensure that tourism has a clear future and continues to benefit all the people and economies of the world.”

This is the first time that the WTTC Global Summit has been held in Southeast Asia. The theme of the Summit was “Transforming our World” which was in line with 2017 being the International Year of Sustainable Tourism for Development. All sessions and discussions at the Summit in Bangkok can be viewed at: https://www.wttc.org/
Source link

Recommendations regarding the Royal Cremation for the late King Bhumibol Adulyadej

Which are South-East Asia’s most tourism-friendly destinations?