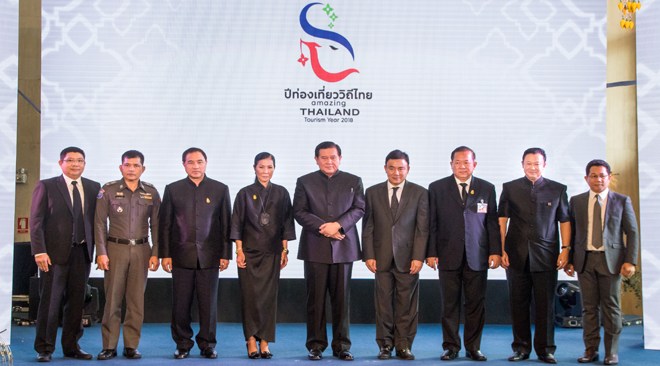 The Tourism Authority of Thailand’s (TAT) is launching the ‘Amazing Thailand Tourism Year 2018‘ on 1 November to support the government’s national tourism development plan highlighting a busy calendar of international events.

“The emphasis is on inclusive tourism, based on the government’s 12th National Economic and Social Development Plan and 2nd National Tourism Development Plan that maintains a balance between the economy, environment and benefits for Thai society. The Amazing Thailand Tourism Year 2018 once again gives the country another outstanding opportunity to showcase its capabilities during many large events the Kingdom will host in 2017 and 2018.”

– International Fleet Review will be hosted by the Royal Thai Navy to mark ASEAN’s 50th anniversary since its founding. Over 40 modern warships and 10,000 crew members from 30 countries are expected to join the historic fleet display on Pattaya Bay from 13 to 22 November, 2017.

– Air Race 1 World Cup Thailand 2017 is scheduled from 17 to 19 November, 2017, at the U-Tapao Rayong-Pattaya International Airport. It will be the only international air race where multiple heats are flown at the same time.

– 4th UNWTO World Forum on Gastronomy Tourism is scheduled for May 2018 and will help support the TAT’s gastronomy tourism efforts by promoting Thai food and the country’s culinary potential on a global stage.

Mr. Yuthasak Supasorn, TAT Governor said that these events will reinforce the perception of Thailand as a good host venue.

Mr. Yuthasak said “Amazing Thailand is the country’s most enduring and award-winning tourism promotion. It highlights many new, exciting international events plus cultural elements that make the Thai tourism offering so appealing.”