Thailand celebrated the start of Qatar Airways’ latest direct non-stop service from Doha to Chiang Mai, bringing significant new sources of traffic by allowing visitors from Europe, the Middle East and Africa to connect to the Northern Thai city via the airline’s hub in Qatar.

The welcome ceremony was presided over by H.E. Mr. Weerasak Kowsurat, Minister of Tourism and Sports (below picture, 5th from right).

Qatar Airways will operate four flights per week on the Doha-Chiang Mai route with an Airbus A330-200 aircraft, which features 24 seats in Business Class and 236 seats in Economy Class. The seasonal service will operate from December 2017 until May 2018, and resume once again for the Winter 2018 season in October 2018.

“Thailand continues to grow in popularity with holiday-makers seeking to explore and relax in this beautiful country. The new route we have launched today reflects the increasing demand from our customers across our network for more high-quality leisure destinations, especially in the Far East.”

It is also one of the Kingdom’s must-visit destinations, and has received several awards and accolades, including the third best city in Travel + Leisure’s World’s Top 15 Cities for 2017, and ranked 12th in TripAdvisor Travellers’ Choice Awards’ Top 25 Destinations in Asia. 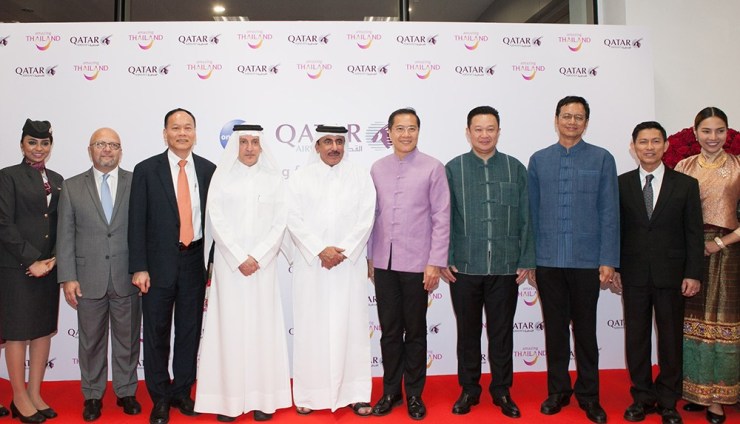 Mr. Yuthasak Supasorn, Governor of the Tourism Authority of Thailand (TAT), said: “Blessed with a wonderful climate, rich local cultural and natural heritage, and numerous Royal Projects, Chiang Mai is a testament to the TAT’s latest marketing concept of ‘Open to the New Shades’ where first-time and repeat visitors can discover new perspectives in existing Thai attractions.

“Chiang Mai continues to benefit from convenient air access with a multitude of international and domestic flights, and the start of Qatar Airways’ direct service from Doha marks a new era of connectivity between Chiang Mai and the Middle East as well as more than 150 destinations in the airline’s global network.”

From Doha, Qatar Airways currently operates 35 times a week to Bangkok, 14 times a week to Phuket, and a daily flight to Krabi. From 28 January, next year, the airline will add its fifth Thai destination, Pattaya, with flights between Doha and U-Tapao Rayong-Pattaya International Airport.

As the 2017/2018 peak holiday season closes, travel planning for the next round of 2018 holidays is on the front burner for families, singles and business travellers. END_OF_DOCUMENT_TOKEN_TO_BE_REPLACED

Maybe it’s the fact that there are vending machines that dispense solid gold. But Dubai is significantly outpacing all other cities when it comes to how much money overnight visitors are spending. END_OF_DOCUMENT_TOKEN_TO_BE_REPLACED

Bangkok is one of Etihad Airways’ busiest routes – around 800,000 guests travelled to and from Bangkok in 2016 alone, and more than 6 million guests have flown on the airline’s Thailand routes since 2007

UAE’s Etihad Airways and The Tourism Authority of Thailand (TAT) signed a landmark $1 million agreement to increase tourism to Thailand during an event organized at the Executive Lounge, Grande Centre Point Terminal 21 END_OF_DOCUMENT_TOKEN_TO_BE_REPLACED