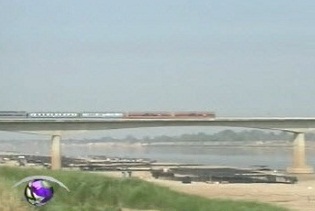 Cross-border trade between Thailand and the Lao PDR at Nong Khai’s Friendship Bridge border customs house in this northeastern province in the first quarter of the current fiscal year grew by nearly Bt13.9 billion about US$463 million, according a senior customs officer.

Padermdej Mangkang, Nong Khai’s acting customs chief, said Friday that the value of trade along the Mekong River in Nong Khai reached some 13.87 billion some $462.5 million. The trade value included Thailand’s exports to its landlocked neighbour worth Bt13.3 about $443.1 million and imports to the kingdom valued at Bt579.86 million more than $19.3 million.

As a result, Thailand enjoyed a trade surplus of Bt12.7 billion over $423.8 million, Mr Padermdej explained. The top exported goods from Thailand to Lao PDR with the highest export values were oil at some Bt2.97 billion over $99.16 million, followed by automobiles at Bt950 million more than $31.66 million.

Rising export values with high demand for quality Thai products were attributed to the ongoing development in the Lao PDR, particularly improvement of the country’s infrastructure as well as building dams and operating mines, the acting Nong Khai customs head added.

The first Thai-Lao Friendship Bridge, linking Thailand’s Nong Khai province with the Lao capital of Vientiane, on the Mekong River was opened to the public in 1994 as the gateway to Thailand and the landlocked country as well as Indochina.Since its opening, the Friendship bridge brought about benefits to the two neigbouring countries in terms of their economies, trade, tourism, investment, cultural exchanges, transportation and logistics. MCOT online news

Thailand’s February exports grew 0,9%, for the first time since flooding

China and The Middle East: trade and mutual advantages