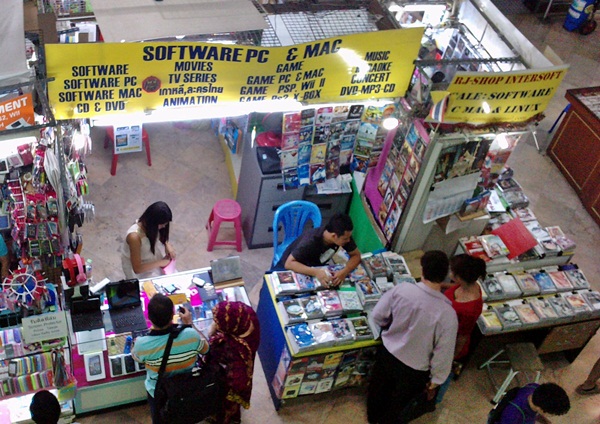 Violations of direct intellectual property (IP) rights in Thailand, especially on foreign movies and music, are expected to decline due to the present borderless world with increasing people using the Internet and wireless systems.

Pajchima Tanasanti, Director-General of the Thai Ministry of Commerce’s Department of Intellectual Property, told reporters on Monday that IP violators in the country now tend to copy from online systems, rather than making CD or DVD copies which were earlier popular.

Violations of direct intellectual property (IP) rights in Thailand, especially on foreign movies and music, are expected to decline, because online piracy is easier than copying and reselling counterfeit CD and DVD

Pajchima insisted that even the enforcement of stricter laws cannot completely wipe out violators of intellectual property rights in the country because the IP violators are switching to copying them to the online systems, Thai News Agency (TNA) reported.

With current innovative technologies, Pajchima acknowledged, it should be more difficult for authorities concerned to control the violations of intellectual property rights, as violators could copy from smart phones or smart televisions.

The 2012 Special 301 review process examined IPR protection and enforcement in 77 trading partners. Following extensive research and analysis, USTR has listed the 40 trading partners below as follows:

The joint cooperation aims to protect intellectual property (IP) rights, paving the way for the establishment of the Asean Economic Community (AEC) on Jan 1, 2015.

The remark was made in Bangkok on Wednesday at a seminar on “Intellectual Property Rights in Vietnam”, jointly held by the Thai and Vietnamese IP agencies.

The United States is encouraged that Thailand’s new government has affirmed its commitment to improving IPR protection and enforcement. Some U.S. rights holders report good cooperation with Thai enforcement authorities, including the Royal Thai Police and Royal Thai Customs.

Thailand has also taken some steps to address its longstanding problem of piracy of cable and satellite signals, although significant concerns remain about the prevalence of this problem in Thailand. The United States remains seriously concerned about Thailand’s failure to complete many of the initiatives begun in past years.

Several key pieces of legislation remain pending, including legislation to address landlord liability, to address unauthorized camcording of motion pictures in theaters, to provide Thai Customs with ex officio authority, to implement provisions of the WIPO Internet Treaties, and to establish improved legal mechanisms to address the rapidly growing problem of copyright piracy and trademark counterfeiting on the Internet.

according to the official USTR 2012 report.

The United States urges Thailand to improve its enforcement efforts and to provide for, and impose, deterrent-level sentences. Thailand should also make greater efforts to address widespread copyright piracy and trademark counterfeiting. The United States encourages Thailand to provide an effective system for protecting against the unfair commercial use, as well as unauthorized disclosure, of test or other data generated to obtain marketing approval for pharmaceutical and agricultural chemical products.
via BERNAMA – Thailand’s IP Violations Likely To Drop.