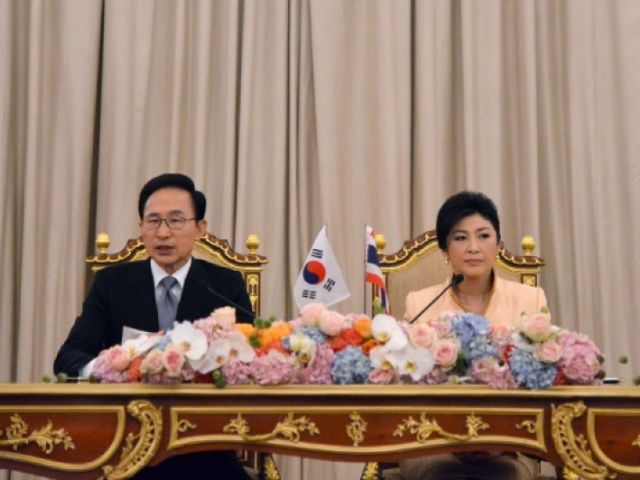 Thailand and South Korea agreed on Saturday to work closely together to expand bilateral trade volume to US$30 billion by 2016 as their leaders pledged to upgrade relations between the two countries to a “strategic partnership.

“Thai Prime Minister Yingluck Shinawatra and visiting South Korean President Lee Myung-bak reached the agreement during bilateral talks in Bangkok.Mr Lee, who arrived in Bangkok on Friday, is the first South Korean president to make an official bilateral visit to Thailand in 31 years.

According to the joint statement after the talks, the leaders also agreed to “serious efforts” to conclude a trade and economic cooperation “action plan” for 2013-2017 at an early date to further energise trade and minimise trade barriers. They asked the joint trade committee of both sides to start negotiations as soon as possible.Trade between South Korea and Thailand reached an all-time high of $13.9 billion last year.

Bangkok and Seoul have agreed to seek preliminary discussions and a joint study about forging a comprehensive economic partnership agreement in order to strengthen economic links between the two countries, said the joint statement.

via Thailand, South Korea agree to expand trade to US$30 bln within 5 years | MCOT.net.