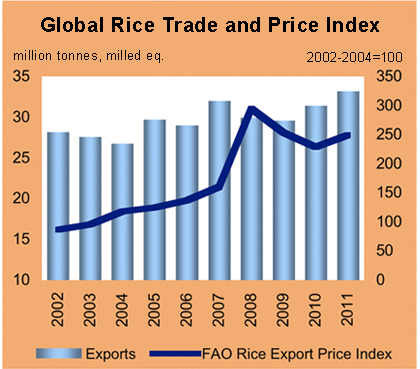 Nigerian Minister of Agriculture and Rural Development, Dr Akinwumi Adesina, has raised the alarm that some countries, particularly Thailand and India, are dumping rice that are as old as 15 years in the country.

The minister, who speake at the 2012 annual lecture of the Chartered Institute of Bankers of Nigeria CIBN in Lagos, disclosed that Nigeria had become the largest importer of rice in the world, warning that except the country embarked on aggressive import substitution programme for rice, it would be spending $150 million annually importing rice by 2050.

“A lot of the rice imported into Nigeria, especially from Thailand and India, is 10 to 15-year-old rice coming out of their strategic grain reserves. It is being dumped on our market and that is why it is so cheap.

“Unless Nigeria begins an aggressive import substitution programme for rice, it will spend $150 billion annually importing rice by 2050. The nation will be broke,”

he warned.The minister, who spoke on ‘New Agricultural Transformation in Nigeria: Opportunities for banks and other stakeholders in economic diversification,’ suggested that to unlock the potential in the agricultural sector, there is need for realigning the banking and finance sector to lend more to agriculture, regretting that banks in the country are yet to harness this potential, as they currently lend less than three per cent of their commercial loans to the sector.