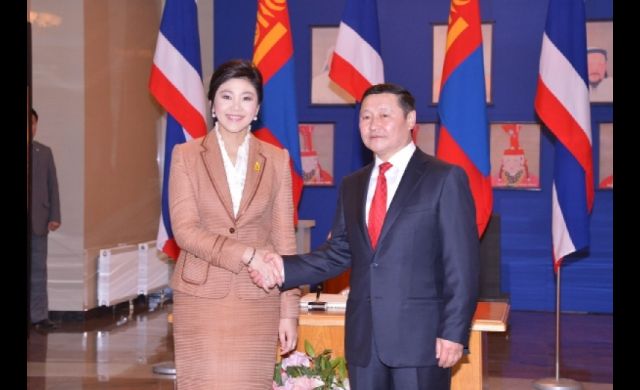 Thai Prime Minister Yingluck Shinawatra, now on a three-day official visit to the landlocked country, said both countries are keen to encourage their public and private sectors to more actively accelerate trade and investment in mining, tourism, agriculture, livestock, energy and public health.

The value of Thai-Mongolian trade was only US$13.69 million last year and it could double in the next three years

Thailand is ready to sign an agreement for the promotion and protection of investment as a mechanism to boost trade and investment of the two countries, she said.

The value of Thai-Mongolian trade was only US$13.69 million last year and it could double in the next three years, she said.

The prime minister called for the establishment of a joint trade committee to facilitate cooperation.

Thailand can manufacture light pickup trucks and agricultural machinery for Mongolia, she added.

The leaders of the two countries presided over the signing of an agreement on cooperation in science and technology and MoUs, the first on the establishment of a consultative body on bilateral cooperation and the second on joint economic, trade and investment development between the Mongolia’s Chamber of Trade and Industry and three Thai private sector organisations. (MCOT online news)