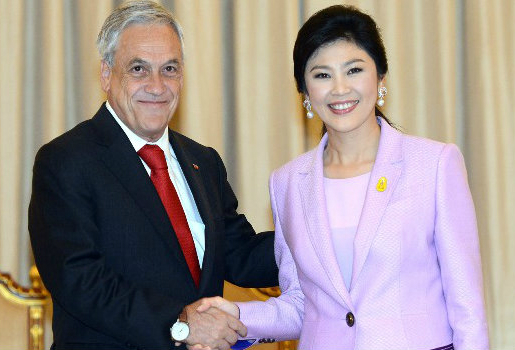 Thailand has signed a Free Trade Agreement (FTA) with Chile — although it still awaits legislative approval — and upgraded ties with Peru to a strategic partnership ahead of the 21st Asia-Pacific Economic Cooperation (APEC) summit in Bali.

Thai Prime Minister Yingluck Shinawatra and Chilean President Sebastián Piñera Echenique signed the agreement last Friday in Bangkok, which will remove tariffs on more than 90 percent of Chilean products to be exported to the Asian kingdom.

“For Chilean exporters, this will mean an access in preferential conditions to a market of more than 70 million people,”

Piñera Echenique said in a statement.

This FTA “is a strategic tool” for Thailand “to penetrate” Latin America and Chile’s trading partners, said Jintana Chaiyawonnagal, deputy director-general of the Thai Trade Negotiations Department. Chile is a trading center in South America and “has more than 60 bilateral trade pacts with countries worldwide,” she emphasized.

via Thailand Inks FTA With Chile, Ups to Strategic Partnership With Peru.