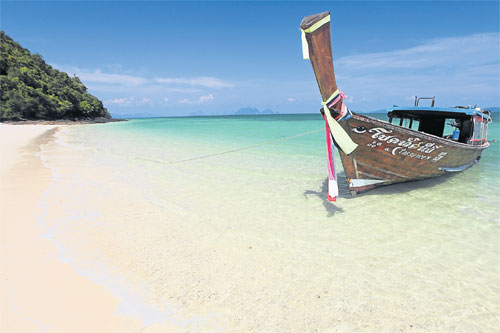 Only a five-minute ride by speed boat from Phuket, Koh Naka is an utterly different world. It is quiet and does not have any nocturnal entertainment because the island is home to a Muslim community.

Koh Naka occupies only 1,500 rai of land (240 hectares), including hills and you can paddle a canoe around the island within two hours or explore it by foot.

The northern tip of the island is home to Naka Island Resort & Spa, a luxurious private hideaway. It’s a surprise to find that the low-profile island boasts rooms in Starwood’s Luxury Collection. From the hotel, there is a small lane that is just wide enough for two motorcycles linking the property to the Muslim fishing village on the southwest of the island. A rubber plantation is found along the way including some households that raise goats.

Children at Ban Koh Naka School, the only school on the island.

Most of the villagers are fishermen, said Somposh Sawasdee, acting director of Ban Koh Naka School, the island’s only school with 22 students aged from three-years old to primary school level.

Some villagers also grow coconuts or vegetables which do not need a lot of water because there is no tap water or reservoir on the island. The villagers dig underground wells and share the water. Each house generates its own electricity from gasoline or donated solar cells, which can power one or two fluorescent lights at night. Although close to Phuket, basic infrastructure has yet to reach the island.

2.3 Millions to Fly in Thailand for Chinese New Year