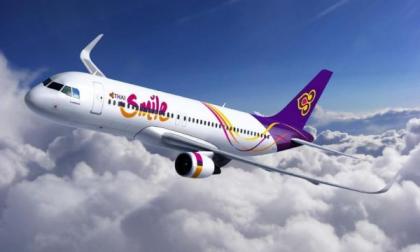 THAI Executive Vice President for Strategy and Business Development, Chokchai Panyayong, spoke after a board meeting which also approved business plans for both THAI and its new airline.Flight captains and cabin crew are ready for THAI Smile Airs operations, he said.

The first route to Macau will operate two flights daily. Tickets will begin being sold in April.

The passenger load is expected to reach over 70 per cent per flight.Four aircraft are to be operated this year for the main routes from the Thai capital to Chiang Mai, Phuket, Kolkata, Jakarta, and Phnom Penh.

The airlines name THAI Smile Air was approved in August last year by the THAI executive board. According to THAI President Piyasvasti Amranand, the new carrier is positioned to be a light-premium sub-brand of THAI, offering passengers another option for flight services.

The airlines image will be based on a trendy, friendly and worthy concept, different than the general concept of other low-cost airliners.Regarding Thai Airways International, the board also approved THAI’s strategic plan for 2012-2018 and its business plan for 2012-2013.

Related Topics:MacauThai airways
Up Next

Etihad Airways, and airberlin are boosting their Thailand service