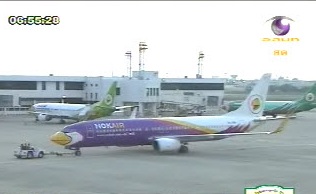 Nok Air moved its base to Suvarnabhumi Airport after Don Mueang Airport was flooded. Two other flights today are to the southern province of Nakhon Si Thammarat and the northeastern province of Ubon Ratchathani.

Overall services of the first day of operation began smoothly, although a minor disruption in communication delayed check-in for 10 minutes.Passengers appeared to be satisfied with the level of service.

Another low-cost airline, Orient Thai, which also operated at Don Mueang Airport before shifting to Suvarnabhumi Airport because of the flood, has not yet announced whether or not it will resume services at Don Mueang.