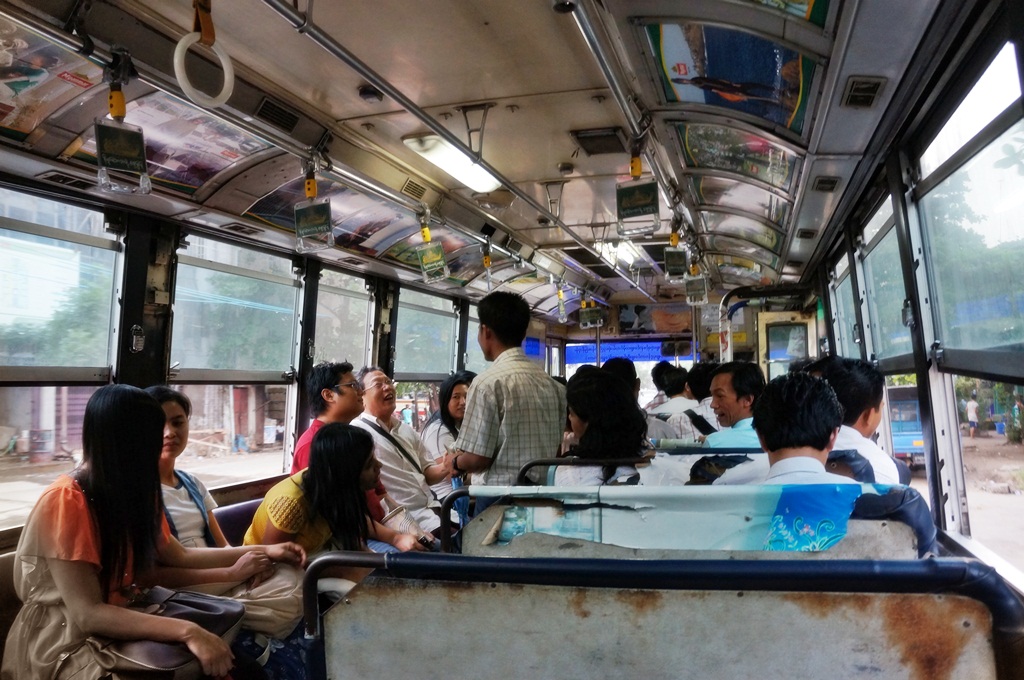 Every traveler who has visited Myanmar has at least one, and often many, stories about the difficult and often comical experiences they have encountered with transportation throughout the country. If it were not for the profound pleasure of traveling this beautiful place and the friendliness of the locals, getting around would be a frustration for any Westerner used to efficient or even remotely reliable transportation.

Broken down buses, old taxis, trucks being repaired in the middle of the streets, accidents, dangerous downhill drives, uncomfortable benches, bumpy roads, and many long hours which can often double in number with the unpredictable occurrences, are all part of travel in Myanmar.

Anyone who is interested must be prepared to spend a large amount of time in the transition between main cities and sites, unless they are willing to pay the extra dollars for internal flights. Picture: Yukari Sekine

The first occurrence during my long-distance travels in the country happened “on the road to Mandalay”, as the song goes. The new 563-kilometer expressway between Yangon and Mandalay was hailed as an important sign of progress when it was inaugurated in December 2010.

Although it was the straightest road I had seen in Myanmar, and that is not to say much, we woke up at 3am to a loud honking noise, a blare of light and a high impact collision.

A truck had smashed frontally against our bus, breaking the windshield and hurting the driver

Whether the accident had been caused by a sleepy conductor or the poor lighting on the highway was not clear to me, but we waited on the side of the road for an hour before the next bus picked us up. The locals were patient and seemed used to this kind of situation, as I would find out was all too common.

After seeing Mandalay, a very interesting town but polluted because of its many old cars and motorbikes that contribute to the haziness of the dry season, I explored the majestic temples of Bagan by bicycle. It is normal to cycle around with a flat tyre to only fill them up at the end of the day. Old bicycles in Myanmar would be the joy of any enthusiast as this is almost a live museum for them. Horse-drawn carriages are charming but extremely uncomfortable in Bagan, and the roads around the site are made of gravel, far from being the smooth paved ones you would see around Angkor Wat, in Cambodia.

I  woke up at 4am to get a bus from Bagan to Inle Lake, only to find it was a bus with tiny benches, fitting two tiny Burmese people but not, as tourists would hope, two big English guys as the ones who sat in front of me. My Belgian colleague had his knees pressed against the seat in front, and we all rode the windy, bumpy road up the hills and down to Inle.

Plastic stools were placed on the corridor when more passengers boarded, and I had the impression some climbed on top of the roof. People would often throw up out of the window, and the narrow, single lane was a little worrisome to say the least. The bus had to wait on a curve while other cars passed not far from the edge of the cliffs.

The most memorable transport experience, however, was the return from the sacred pilgrimage site of the Golden Rock, on Mount Kyaiktiyo, located approximately 200 kilometers from Yangon. The pilgrimage to the peak is a challenge few undertake, especially in the stifling summer heat. Most Burmese line up at the base camp in Kinpun to load the pick-up trucks that fill up with about 40 people, despite the normal space for about 15.

According to local superstition, you should not ask “how much longer” during a trip, as this is tempting fate

I cannot say the drive down felt very safe, and whatever proximity to Buddhist enlightenment that I may have attained in the three hour hike up the hill was lost in the jittering, brake-screeching descent back, squashed tightly on the benches with other dozens of good-spirited women, children, men and monks.

I held tightly hoping the truck would not topple to the side, as I was aware of the Myanmar accidents had made headlines in the past, and did not wish to add to the statistic. I had the vague impression that the young man behind me was holding his hands in a meditating position to preserve his calm, with an expression I could only describe as tense. This was for 45 minutes downhill. It was a relief to finally arrive at the base and be watered down by the New Year buckets of Thingyan water.

The odyssey from the base camp back to Yangon, meant to be around 4 hours, took in fact around 9, I took three pick-up trucks that broke down successively as passengers switched from one dysfunctional vehicle to the next. Each time, we would wait on the side of the road, signaling for some good soul to stop and rescue us. Adding to the fun, the truck was watered by every single group of youngsters enjoying the Water Festival, along the approximately 200 kilometers back to Yangon.

Perhaps I was asking far too many times if we would be in Yangon by 5pm, as originally planned, when the driver would look uncomfortable and not answer. I later found out that according to Myanmar superstition, you should not ask “how much longer” during a trip, as this is tempting fate. Nine hours later, I think this was true

Related Topics:travel and vacations
Up Next