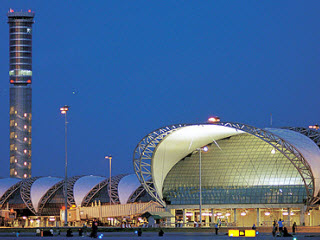 The international airport will have 180 less flights or 10 million less passengers each year after budget airline Thai AirAsia relocates to Don Mueang airport on Monday.

Mr Somchai said 250 more immigration officials will be on duty at Suvarnabhumi airport to accelerate visa inspections, and reduce the process from 50 minutes per passenger to 20 minutes.

Passengers will find it more convenient with the visa checking areas three times larger while baggage claims must be finished within 30 minutes after a flight lands, with the first baggage delivered to a carousel in 20 minutes, Mr Somchai said, adding that a 15-30 minute free wi-fi service will also be available.

Suvarnabhumi airport served 48.32 million passengers between Oct 2011 and August this year, a 9.65 per cent increase year-on-year.

It is estimated that the total number will be 52.6 million passengers, or 301,477 flight, at the end of this fiscal year on Sunday Sept 30.  It predicted an 8-9 per cent growth next year with a major increase in passengers from China, Malaysia and India.

Airports of Thailand (AoT) has planned a second-phase development project of Suvarnabhumi with an investment of Bt65 billion to cope with 60 million passengers by 2017. (MCOT online news)