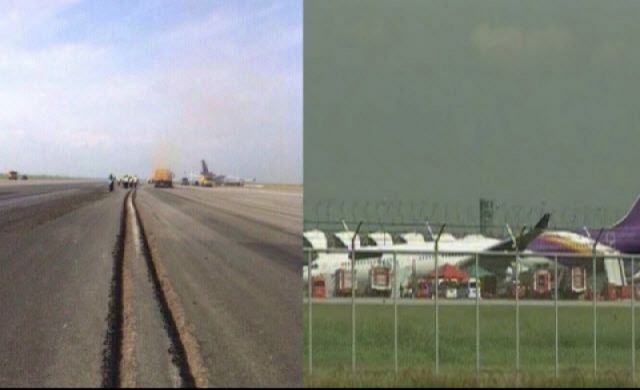 Repair work on the damaged runway from a Thai Airways International aircraft accident at Bangkok’s Suvarnabhumi Airport will not be finished until noon tomorrow during which time flight delays are possible, according to a senior executive of the Airports of Thailand (AoT).

Sita Divari, chairman of the AoT Board of Directors, said the damaged stretch of the north side of the eastern runway which was about 1,200-1,600 metres long was fixed as of 3 pm yesterday. However, the Airbus A330-300 which skidded off the runway has yet to be taken away from the runway and its removal will not be completed until noon tomorrow, he said.

The eastern runway is closed temporarily, with Don Mueang Airport and U-tapao Airport in Sattahip being instructed to be prepared for possible flight diversions from Suvarnabhumi, he said.

Rawewan Netrakavesna, Suvarnabhumi Airport general manager, said a coordination centre has been set up at Room CIP5 on the third floor of the western passenger building to facilitate passengers round the clock. Enquiries can be made at Tel 02-132-9999.

Thai Airways International flight TG679, operating an Airbus A330-300 aircraft, departed from Guangzhou to Bangkok on Sunday at 9.25 pm (local time in Guangzhou) and skidded off the runway upon landing at Suvarnabhumi Airport. It arrived Bangkok at 11.20 pm. The aircraft carried 288 passengers and 14 cabin crew.

Mr Sita said 14 injured passengers on flight TG679 were discharged from the hospital yesterday while six other — four Chinese, a Thai and a Zimbabwean, were hospitalised. (MCOT online news)

via Arrival and departure inconvenience at Suvarnabhumi Airport continue into tomorrow | MCOT.net | MCOT.net.