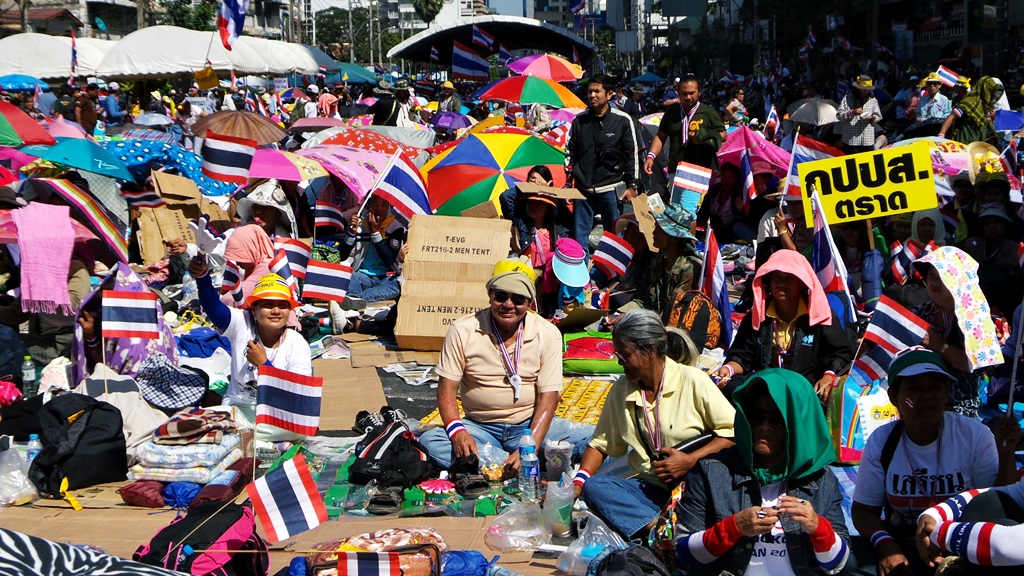 Bangkok Shutdown has shutdown : dwindling protesters numbers and unclear political agenda are the two more likely causes responsible for the sudden and most welcome announcement.

Other  unknown negotiations behind the scene might also have eventually convinced Mr.Suthep to put an end to commuters misery in the Thailand’s capital. But this doesn’t mean that the Shinawatra family can now go shopping without being harassed by whistle blowers.

PDRC Secretary-General Suthep Thaugsuban said that the group had decided to stop the “Bangkok Shutdown,” which began on 13 January 2014. However, it would continue to attack businesses in connection with the Shinawatra family.

As of Monday, 3 March 2014, all political demonstration activities, carried out by the People’s Democratic Reform Committee (PDRC), which is the main anti-government demonstrator group, will be centered at the Lumphini Park.

At the Lumphini Park, the group could hold meetings and seminars to exchange views on various issues, especially the move to introduce “reform before election.” A big cleaning activity is being carried out at the Pathum Wan, Ratchaprasong, Silom, and Asok rally sites.

All stages at the three locations will be dismantled and blocked roads will be cleared. Meanwhile, three other demonstration stages by other anti-government demonstrator groups remain at the Government Complex (Chaeng Watthana Road) Ratchadamnoen Avenue (near the Democracy Monument), and Phitsanulok Road (near Government House). The demonstrators are campaigning for political reform before an election.

Bangkok remains under the state of emergency following the Civil Court’s ruling on 19 February 2014 that the caretaker government has the authority to enforce the decree to maintain peace and order. But the Court also ruled that the government has to refrain from use of violence on anti-government demonstrators or break up a peaceful demonstration.

The 60-day emergency decree, effective on 22 January 2014, currently covers Bangkok and some parts of nearby provinces (Nonthaburi and Samut Prakan) only and not any other destinations in Thailand.

Despite the emergency decree, life in the most parts of Bangkok and throughout Thailand continues as usual, and local residents and international visitors can continue to travel within Bangkok and other destinations in the country. Twenty people have been killed and about 700 injured since the political protests started at the end of October 2013. The protests have continued to pressure the caretaker government to resign.

The Center for Maintaining Peace and Order (CMPO) revealed that the United Nations Secretary-General Ban Ki Moon was of the view that the situation in Thailand has escalated and it is necessary that all parties concerned discuss and seek the best possible solutions. Inside Thailand — End of the “Bangkok Shutdown”

Bangkok 61st most expensive city to live in

The Thai baht rose to 33.94 baht per USD, a record high in the past two years after the Bank of Thailand (BOT) decided not to take measures to stop the rise of the domestic currency. END_OF_DOCUMENT_TOKEN_TO_BE_REPLACED

The world’s six largest pension systems will have a joint shortfall of $224 trillion by 2050, imperiling the incomes of future generations and setting the industrialized world up for the biggest pension crisis in history. END_OF_DOCUMENT_TOKEN_TO_BE_REPLACED