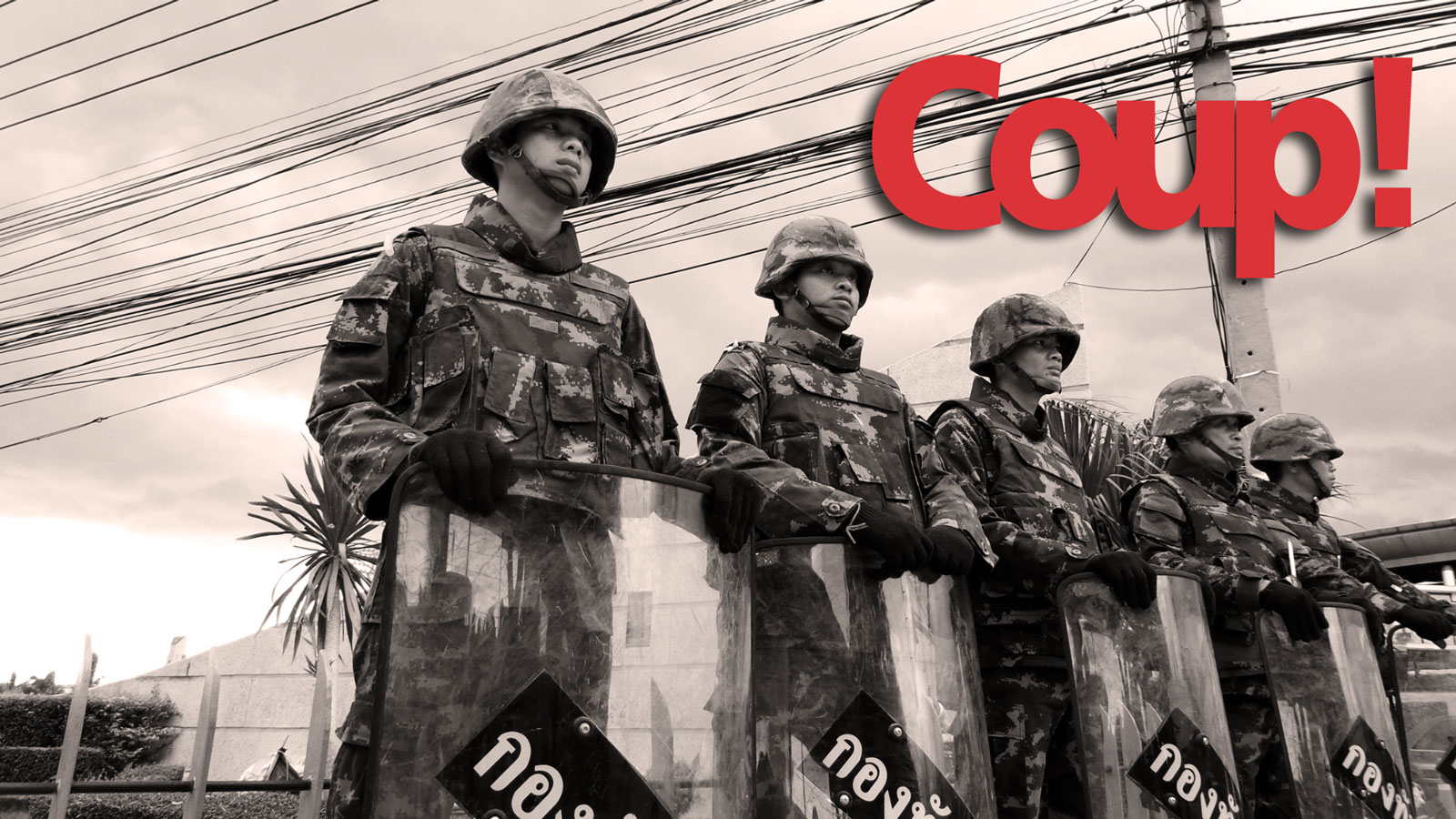 This is not the first time the question arises in Thailand, and as usual the answer depends largely on the person asking the question.
If this is your umpteenth trip to Thailand : keep abreast of places to avoid , and you may not even notice any difference with your previous stay.  The curfew ( from 22h until 5am ) that is still enforced at the time of writing this article, will be your only reminder of army’s rule on the country.

There has been sporadic clashes with opposition to the coup in Bangkok, but no casualties at this time, and those arrested were released a few hours later.

Given the significant stockpile of weapons seized by the army in recent days, you can even almost say that the situation is safer now than before the coup .

However, the possibility of new attacks and street violence is not completely excluded : the red shirts (UDD pro Thaksin ) announced repeatedly that they would not accept a new coup, and that they were armed and ready to react violently.

If you wish to have a normal vacation time in Thailand, it is still possible, if you keep in mind to avoid gatherings at all time.

Souvenir pictures or selfies with the military are not necessarily a good idea. Should the  crisis become violent like in 2010, they will be the first targets of bombings and snipers.

Basically, avoid getting involved in what is anyway none of your business (politics in Thailand) and everything should be fine.

For the rest the situation of human rights in Thailand is not worse than in Morocco or Turkey.

Although US embassy insists on “postponing unnecessary travel to Thailand in its latest statement, the French Embassy as a much more remaxed approach.

France does not advise against travel to Thailand and simply notes :

Three days after the military coup , the opponents of the junta are still taking the street in spite of  prohibition rally .

In Bangkok , marches converge to Victory Monument , and through the district of Ratchaprasong .
Demonstrations also took place in the provinces, including Chiang Mai.

For your safety, it is strongly recommended to avoid gatherings and protest march in Bangkok and in the provinces , including the site of the Victory Monument in Bangkok.

For the record, the curfew is still in force from 22h to 5h . It is strongly recommended that you respect it.

Transport, airports are operating normally but schedules bus, subway and BTS have been adapted to meet the curfew : the service is interrupted from 21h .
It is impossible to predict when the curfew will be lifted, but if the situation remains calm, he should not be continued beyond one or two weeks after the coup.

Tourism-related businesses and services in Thailand continue to open and operating as per normal, but operating hours have been adjusted to comply with a nationwide curfew (from 22.00 – 05.00 hours). However, all airports in Bangkok and throughout the kingdom continue to carry on with their normal operating hours and air passengers are allowed to travel to and from the airports at any time as usual.

The curfew will be in place until further notice, according to the coup makers (National Council for Peace and Order – NCPO), which explained that the council’s key objectives were to ensure a reform of political, economic and social institutions in order to bring out peace and order to the kingdom.

As stated above, all airports throughout Thailand, including at key international gateways – Bangkok (Suvarnabhumi and Don Mueang), Phuket, Ko Samui, Hat Yai and Chiang Mai – are operating as per normal. Airlines also continue to operate incoming and outgoing flights as per normal.

Air passengers with arrival and departure flights scheduled during curfew are allowed to travel to and from the airports at any time as usual.

Other modes of transport, by road, rail and waterway, are also operating as per normal throughout Thailand, including at key tourist destinations, such as, Bangkok, Pattaya, Phuket, Ko Samui, Chiang Mai and Hat Yai.

But operating hours have been adjusted to comply with the curfew, i.e. the BTS Skytrain and MRT Subway systems in Bangkok are now operating from 06.00 – 21.00 hours while inter-provincial passenger bus/train services will not be operating during curfew.

Hotels, resorts, spas, restaurants, entertainment venues, cinemas, convention centres, shopping malls, superstores, convenient stores, as well as banks, petrol and gas stations, are open and operating as per normal, but operating hours have been adjusted to comply with the curfew. Hospitals and medical personnel are permitted to carry on with their normal operating hours.

Telephone both landline and mobile and Internet services are available 24/7 as per normal.

In popular Thai beach destinations including Ko Samui, Phuket, Pattya, Hua Hin and Krabi, all tourism-related businesses and services are operating as per normal during the day. At nighttime, curfew has been observed.

In key administrative and political strongholds including Bangkok and Chiang Mai, all tourism-related businesses and services are also operating as per normal during the day. Curfew has been widely observed at nighttime. Nevertheless, tourists are advised to be vigilant and check travel routing before travelling to avoid being inconvenienced by movements of security officers and the anti-coup groups.

However, as reported widely in local and international media, Thai military troops were seen exercising restraint when confronting with the anti-coup demonstrators.

The following measures are prepared for travellers travelling to Bangkok and the immediate vicinity:

Individual travellers – both tourists and foreign residents – are advised to keep their passports and other travel documents handy at all times, in case they are required for inspection by security officers.
Group travellers on tour coaches, accompanied by a tour guide or tour leader, are allowed to pass through the checkpoints without any worry.
Taxi services at Suvarnabhumi Airport are available 24 hours at the Platform of the Passenger Terminal on the 1st Floor, Gates 4 and 7. There are 6,000 – 7,000 authorised taxis with Suvarnabhumi Airport stickers displayed on the front windscreen. Security checkpoint officers will allow access for these vehicles.
Any passenger who cannot find a mean of transport out of Suvarnabhumi Airport during curfew may use the facilities available at the CIP Lounges 1-4, located on the 3rd floor of the Passenger Terminal.

Tourists can continue to apply for visa as usual as the NCPO has called for civil servants at all ministries and government agencies to carry on with their normal duties.

Tourists visiting Thailand can contact the following numbers for further information and assistance:

The Tourism Authority of Thailand (TAT) is closely monitoring the situation, and would like to inform tourists and the tourism industry that all concerned public and private agencies will exercise utmost efforts to ensure tourist’s convenience. Under the current circumstances, TAT will be providing updates on a daily basis at www.tatnews.org

The Thai baht rose to 33.94 baht per USD, a record high in the past two years after the Bank of Thailand (BOT) decided not to take measures to stop the rise of the domestic currency. END_OF_DOCUMENT_TOKEN_TO_BE_REPLACED

The world’s six largest pension systems will have a joint shortfall of $224 trillion by 2050, imperiling the incomes of future generations and setting the industrialized world up for the biggest pension crisis in history. END_OF_DOCUMENT_TOKEN_TO_BE_REPLACED