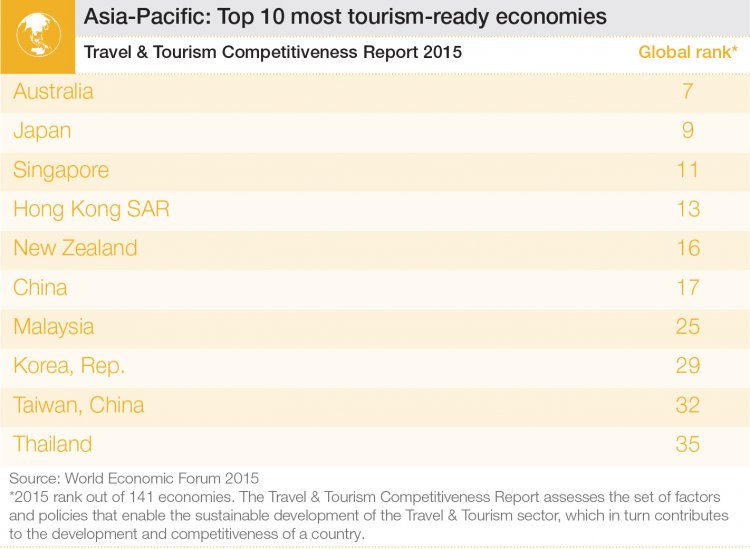 Spain leads the 2015 TTCI ranking for the first time, and Europe—with a total of six countries in the top 10—is confirmed as the region with the most T&T-competitive economies.

For each region, the performance of a few countries is outlined to give a sense of how the results can be interpreted at the national level. Figure 2 shows regional performance by pillar, including the best- and worst-performing countries on each pillar for each region.

The top five performers in the Asia-Pacific are among the region’s more advanced economies: Australia (7th), Japan (9th), Singapore (11th), Hong Kong SAR (13th) and New Zealand (16th). However, the most significant growth in international arrivals is observed in South-East Asia, thanks in part to its region’s price competitiveness and the rapid expansion of its middle class. Developing regional cooperation on visa policies could further boost tourism, though investments are also needed in digital connectivity, infrastructure and protection of rich but depleting natural capital.

While the forum ranked Thailand 10th overall in the Southeast Asia region, it scored last, behind even Myanmar and the Philippines, in terms of “safety and security”.

Worldwide, Thailand’s safety rank plummeted to 132 out of 140, worse than Lebanon, Mali, Burundi and Iran. Two years ago, the kingdom ranked 87th.

“Thailand experienced a decline in tourists’ confidence beginning in December 2008 when international airports started closing and many foreign tour agents quit the country,” the WEF wrote in its report. “The effects continued into 2010, with nearby countries benefitting from an increase in visitors.

Traditional strong travel and tourism destinations such as France, Germany, the United States, the United Kingdom, Switzerland, Australia, Italy, Japan and Canada complete the top 10. Of the large emerging markets, China (17th) and Brazil (28th) made it into the top 30, whereas Russia, South Africa and India ranked 45th, 48th and 52nd, respectively. While this made Brazil and South Africa the best placed in their region, Singapore (11th) came up top in South-East Asia, and the United Arab Emirates (24th) was the highest placed nation in the Middle East and North Africa.