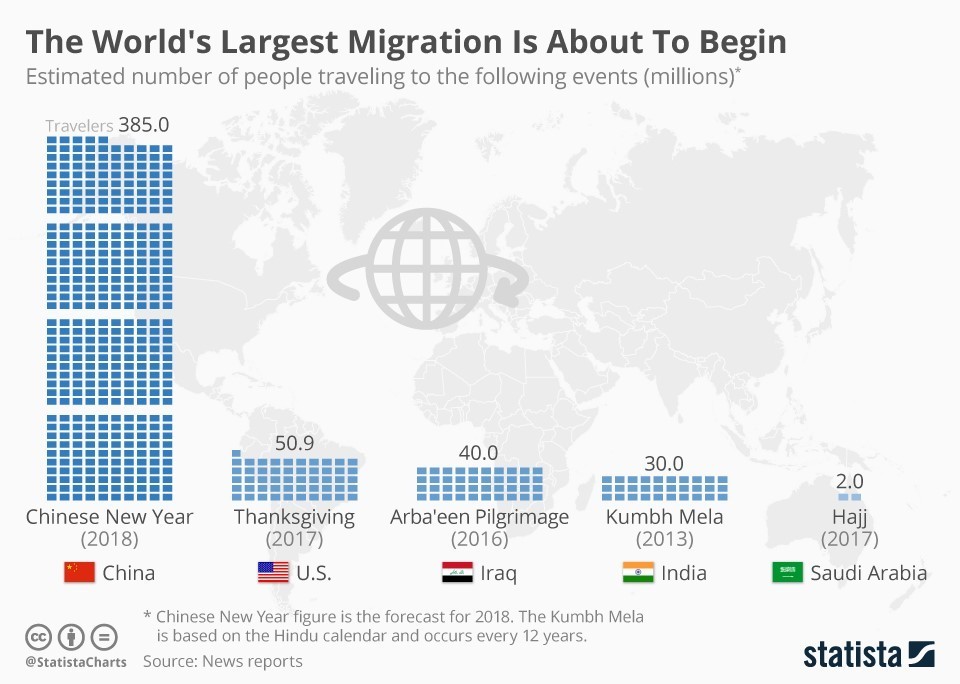 Chinese New Year is arguably the biggest celebration on Earth. Also commonly referred to as Spring Festival and Chunyun, it is also celebrated in North and South Korea and Vietnam.

The Chunyun period started on February 1 and lasts until March 12, with the 2018 Chinese New Year falling on February 16.

The 40-day festival marks the world’s largest human migration. Around three billion trips are expected to be made throughout China by around 390 million people – an 8.8% increase compared to last year.

According to the China Central Television Station, the majority of these trips will be taken via public transport, including almost 60% opting for high-speed trains. It’s not surprising, therefore, that around 3,000km of new track has been laid in time for the Spring Festival travel rush.

Forbes says the four busiest train stations during Chinese New Year will be Beijing, Guangzhou, Shanghai and Zhengzhou. And in Zhengzhou, police officers have been equipped with real-time facial recognition glasses, designed to improve public security.

Via its Facebook page, media outlet People’s Daily says the glasses allow police to hunt down fugitives and spot fake IDs with “just one look”.

Alongside these measures, rail authorities have also launched a range of “smart” technologies, including self-service counters, navigations systems and travel notices, to help travellers with their journeys.

For example, over 90% of the New Year’s Eve set meals available at restaurants have been pre-booked, the Xinhuanet news agency reports.

Unsurprisingly, consumer confidence in China is at an all-time high, with the Consumer Confidence Index reaching 112 points in 2017, up from 106 points in 2016.

Purchasing has also been simplified thanks to massive growth across China’s e-commerce market, which today accounts for 42% of the global share. Many purchases will be delivered to people’s homes during Spring Festival, thanks largely to e-commerce platforms such as Alibaba’s Taobao and JD.com, Xinhuanet says.

And according to the World Economic Forum’s Insight Report on the Future of Consumption in Fast-Growth Consumer Markets – China, online platforms, where international high-end and niche brands are easily accessed, are rising in popularity, while cross-border shopping sites are also leading the consumption upgrade movement.

The world’s most watched TV show

The Spring Festival Gala – broadcast on China Central Television – is often touted as the world’s most watched television show. According to Guinness World Records, the show had nearly 500m unique viewers in 2012. That’s roughly the equivalent of the European Union sitting down to watch the same show.

And the Super Bowl? 103.4 million viewers this year.

It’s thought viewership and interest in the Gala has fallen, but numbers still remain enormous.

While celebrations have modernized in recent years, Spring Festival remains steeped in tradition. Chinese New Year is always marked with the Lantern Festival, which this year is on Friday March 2.
Celebrated on the 15th day of the first Chinese lunar month, the Lantern Festival is seen as a night of partying and freedom, when the sky is filled with a menagerie of brightly-lit flying lanterns and coloured drones. The festival is said to date back around 2,000 years.