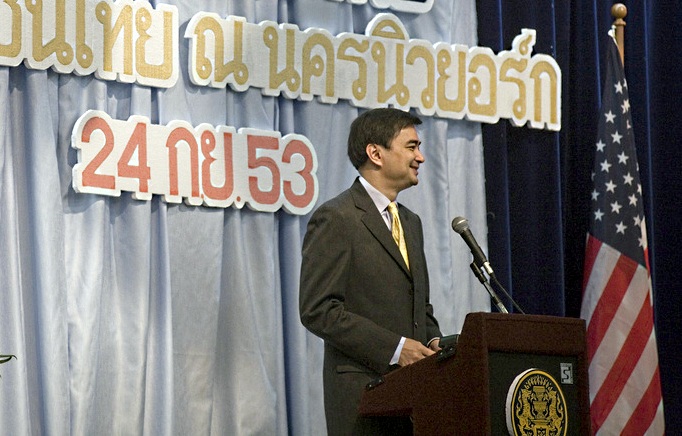 Thai Prime Minister Abhisit Vejjajiva said he will explain investing in Thailand to a segment of the US businessp community, including the issues of the Map Ta Phut industrial projects and the 3G wireless service.

Asked about resolving the long-delayed launch of the 3G, the prime minister said service trials have been conducted by the operators. - Photographer attached to the Prime Minister of the Kingdom of Thailand : Peerapat Wimolrungkarat

Prior to the meeting,Mr Abhisit said that investors did not understand the legal problems related to suspending the Map Ta Phut Industries and the delayed 3G licence bidding and that they thought that government should get both plans moving ahead.

However, regarding the 3G bids, he said the Supreme Administrative Court upheld the ruling to suspend the auction and that the Telecommunications Commission (NTC) must comply with the court. In terms of policy, the government must speed up the bill that would eventually lead to forming the National Broadcasting and Telecommunications Commission (NBTC), which will be authorised to allocate the 3G spectrum, by the end of the year.

Asked about resolving the long-delayed launch of the 3G, the prime minister said service trials have been conducted by the operators. He assigned the ministries of finance, and of information and communication technology to review the possibility of more quickly applying the technology and converting the existing 2G concession contracts into 3G agreements pending the ruling of the Constitution Court.

via PM clarifies investment in Thailand with US business community.

In 2009, the Royal Thai Government continued to increase efforts on prevention and suppression of intellectual property violation. The profile of intellectual property has consistently been raised to a new plane as the administration led by Prime Minister Abhisit Vejjajiva commits itself to the vision of turning the country into a creative and knowledge driven economy.

The Proactive Plan on Prevention and Suppression of Intellectual Property Rights Violation,drafted in close consultation with relevant agencies, was endorsed by the Cabinet on 9 July 2009. The Plan prescribes actions to be taken within 2-6 months by different agencies (e.g., Royal Thai Police, Department of Special Investigation, Customs Department) in six areas as follows:

The government of Thailand is determined to curb corruption in government services.

A list of 41 police officers who took part or assisted in the violation of intellectual property rights has been submitted to the Deputy Prime Minister responsible for national security affairs. The case is under active investigation by the Royal Thai Police.

In December 2009, the Department of Intellectual Property opened HOT LINE 1368 as a new channel for direct reporting of suspicious activities or problematic situations which could involve IP infringement. Information boards were given to the Royal Thai Police for display in the red zone areas in order to promote public participation in the fight against all forms of IP infringement.

In line with the country’s Creative Economy Policy, promotion and protection of intellectual property have become central to economic policy making. It is believed that protecting theinterests of local and foreign rights holders would promote investor confidence, stimulates invention, innovation and creation of original works.

The Department of Intellectual Property has launched “STOP PIRACY” campaign as part of the efforts in response to the policy initiative by Deputy Minister Alongkorn. The main objective is to raise awareness amongst the general public and youth so that they understand the importance of respect for other people’s rights, by, for example, not selling, buying nor using infringing products.

The Department of Intellectual Property had brooches made to order, with the inscription “STOP PIRACY” in the Thai and the English languages and distributed them during different campaign activities

RESPONSES TO THE US CONCERNS ON COMPULSORY LICENSING, DATA PROTECTION, PATENT LINKAGE AND DELAY IN PATENT EXAMINATION

Since the announcement of the compulsory licensing for four cancer treatment medicines by the Ministry of Public Health in early 2008, only two have been enforced and the list has not been expanded since. The current administration has made it clear in various occasions that Thailand attaches high importance to close dialogue between stakeholders including the pharmaceutical industry, patients and government agencies to identify constructive ways and means to ensure continued supply and access to medicines. Thailand would like to underscore the fact that IP also has a social dimension which sometimes could be less compatible with market principles.

The case of compulsory licensing in Thailand is highly sensitive as it relates to the public health and access to medicines by patients suffering from life threatening diseases such as HIV/AIDS and cancer. The government has been handling this issue with great caution to ensure that any measures taken are in conformity with Thailand’s rights and obligations under the international agreements. In response to this, a four-party meeting was held at the Ministry of Foreign Affairs in September 2009 to discuss a possible confidence building mechanism to enable constructive and regular exchanges between relevant government agencies and the pharmaceutical industry.

The meeting was attended by representatives from the Department of Intellectual Property, the Ministry of Public Health, the Ministry of Foreign Affairs and PReMA. The Department of Intellectual Property itself has maintained close dialogue with PReMA. In the recent meeting on 24 December 2009, several issues were discussed such as CL, counterfeit drugs and trademarks, parallel imports.