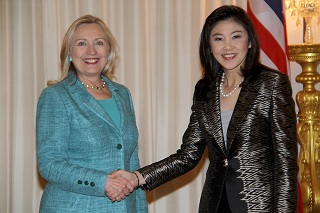 Following her visit to Thailand, US Secretary of State Hillary Clinton announced that the US would help Thailand fight massive flooding and pledged to help the government to restore the totally flooded Don Mueang Airport.

During the discussion, the secretary of state said that additional assistance from the US would be ready to be extended to Thailand

During the discussion, the secretary of state said that additional assistance from the US would be ready to be extended to Thailand, while pledging that Washington would support Thailand to reopen the still inundated Don Mueang Airport, the country’s second largest airport, and rehabilitate flooded police stations.

“One of our major areas of focus will be to help the Thai government reopen Don Mueang Airport, Thailand’s second largest airport, to resume commerce and tourism, and also help reconnect people with their families,” she said at the joint press conference.

She said that an American naval ship the USS Lassen had arrived in the Gulf of Thailand and was on stand-by to help Thailand.

via US to help Thailand to restore flooded Don Mueang Airport.