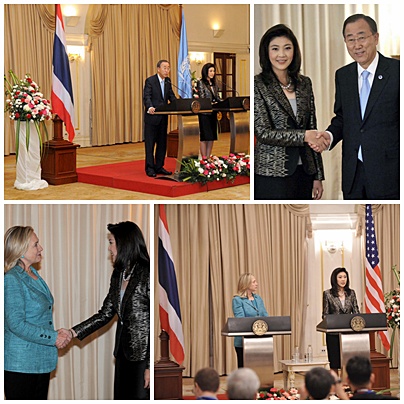 United Nations Secretary-General  and US Secretary of State Hillary Rodham Clinton have offered assistance to Thailand to deal with the flooding, which was described as the worst in the nation’s history.

Mr. Ban and Secretary Clinton met Prime Minister Yingluck Shinawatra on November 16 during their two-day visit to Thailand on November 16-17, when they had a chance to observe the flooding situation in Thailand.

The United Nations Secretary-General said that the flood crisis in Thailand was an unexpected incident, which should be taken as a lesson to prevent the recurrence of the disaster. He cited “prevention” as one of the five principles of the United Nations.

Prime Minister Yingluck said that the Thai government had prepared both short-term and long-term measures to tackle the flood problem. A comprehensive plan is also being worked out to handle water management to prevent flood disasters in the long run.

In her discussion with Secretary Clinton, Prime Minister Yingluck thanked the United States for its assistance to support Thailand’s flood relief efforts. She reaffirmed that the Government would assist foreign investors whose businesses were damaged by floods. Thailand has been in discussion with the United States about the possibility of using U Ta-Pao Airport for humanitarian assistance and disaster relief.

Speaking at a joint press conference with Secretary Clinton, Prime Minister Yingluck pointed out that the damaging effect of this natural disaster on crops, cultivation, and food production was also an issue of great concern. The Government would have to address this issue in order to ensure the well-being of the people.

Secretary Clinton said that the United States had worked closely with the Thai government from the start of this flood and that it would continue to identify ways to support Thailand’s long-term recovery and rebuilding. It offered to help Don Mueang Airport, Thailand’s second largest airport, resume both commercial and passenger operations. She said that the United States was also working to improve Thailand’s capacity to prevent, prepare for, and respond to disasters, like this flood.

Prime Minister Yingluck is now on a visit to Indonesia to attend the 19th ASEAN Summit and Related Summits, to be held on November 17-19 in Bali. Apart from talking about the flooding situation in Thailand, she will take this opportunity to build confidence in the recovery and rehabilitation of the country after the flooding with cooperation and participation from all sectors. The Prime Minister will also aim to enhance cooperation and exchange experience in disaster management in all phases, from preparedness and relief, to recovery and rehabilitation, while focusing on water management.

via Inside Thailand — United Nations and United States Offer Flood Assistance to Thailand.