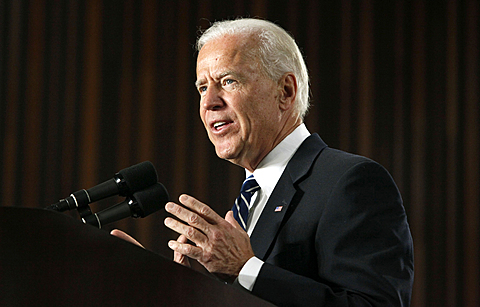 Vice President Biden says uncertainty and confusion surrounding the wishes, well-being, and ultimate destination of blind activist Chen Guangcheng could soon be at an end.

“I think his future is in America.  His future is that he has an opportunity to go to NYU [New York University].  The Chinese have told us that if he files the papers to be able to go abroad, that will be granted.  We are prepared to give a visa right away.  He is going to be able to take his family.  We expect the Chinese to stick to that commitment,” he said.

Chen escaped house arrest last month, spent several days in the U.S. Embassy in Beijing, and then departed for a Chinese hospital.  Biden says the United States has worked to honor Chen’s wishes from the start.

“He came to the embassy.  He was physically hurting.  He needed medical help.  He said he had not seen his family for a year and wanted to be reunited.  And he said, ‘I do not want to leave China – I just do not want to go back to my village’.  That was arranged.  Understandably, by the time he gets to the hospital, talking to friends and others, he has a second thought.  They said, ‘You want to get out of here.  You want to leave [China]’.  And then he came to us and said, ‘I want to leave.  And I want to leave with my family’.  And we got to work,” he said.

Critics of the Obama administration have suggested U.S. officials either pressured Chen to leave the embassy, or at the very least should have anticipated the risks Chen would face upon his departure and counseled him to remain.  Last week, the likely Republican presidential nominee, Mitt Romney, accused the administration of failing to adequately protect the dissident.

Appearing on ABC’s This Week program, Republican Senator John McCain says U.S. officials had made some missteps, and that Chen and his family are not the only individuals at risk in China. “People who helped him are being rounded up and detained.  People are being arrested.  There are other people who helped Mr. Chen get to the American Embassy.  We have got to focus attention on them, as well,” he said.

McCain says the Obama administration’s handling of the dissident’s case is part of a larger pattern of allowing political considerations to override human-rights concerns. “Let us begin with Iran.  Let us begin with 1.5 million people demonstrating in the streets, chanting in English, ‘Obama, Obama, are you with us or with them [Iran’s regime]?’  He [President Obama] did not say a word,” he said.

Vice President Biden disputes any suggestion that the Obama administration has devalued human rights on the world stage.  Asked if the president places greater importance on standing up for freedom or maintaining delicate relations with the Chinese government, Biden said, “Standing up for freedom.”  He added that fighting oppression is in America’s DNA.

Read this article:
Biden: US Ready to Give Visa to Chinese Activist